Coronavirus: Community spread mostly under control, but evidence of people moving about 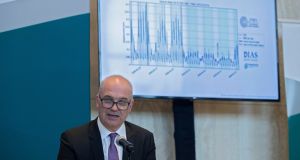 Chief Medical Officer Tony Holohan said the 936 new cases had to be seen in the context of ‘an ambitious programme of testing in nursing homes and residential facilities’. Photograph: Colin Keegan/Collins Dublin

The deaths of another 28 people who had been diagnosed with Covid-19 have been reported by the Department of Health, alongside a significant spike in diagnosed cases.

However, Chief Medical Officer Tony Holohan said the 936 new cases had to be seen in the context of “an ambitious programme of testing in nursing homes and residential facilities”.

Some 794 people have now died in Ireland following a laboratory-confirmed diagnosis of the virus.

Modelling data published by the Department of Health suggests that at the moment, the spread of the virus in the community is substantially under control. However, Dr Holohan emphasised that significant risks were still attached to the relaxation of the measures.

Warning against complacency, he pointed to data gleaned from seismilogical sensors, as well as mobile phones, which indicated an increase in activity in the last few days.

“This is giving us hard evidence that there is more population movement in spite of our continuing advice. It’s giving us an evidential base for some of the concerns we’ve been expressing”

He said that while people may feel that Ireland is on “a pathway towards the slackening of measures on the fifth of May, that is not the case. If the decision was to be made today, we wouldn’t be advising any of the restrictions in place be relaxed.

“It’s really important that people don’t anticipate that’s what’s going to happen on the 5th of May, it is not a certainty that this is the position we’ll be in”.

“It would take very little indeed for us to lose the good work we have done; there’s no sense in which we have achieved something here that couldn’t all be undone very quickly,” he said.

Prof Philip Nolan, chairman of the National Public Health Emergency Team’s epidemiological modelling group, said that the reproduction rate of the virus, the so-called R0 number, was somewhere between 0.5 and 0.8, meaning that on average every infected person is passing the virus on to less than one other person.

However, discusssing the potential growth of that metric if measures are relaxed, he said an R number of 1.6 would see “a dangerous peak in cases, perhaps up to 1,000 a week”. If it were to grow to 2.4, “we have a real difficulty, we wouldn’t be able to cope with that, quite frankly”.

Prof Nolan said there had been a “very significant supression of the growth of Covid-19. . . in Ireland monitored against all the different indicators you might use”. He said data showed the disease is “heavily suppressed in the general population”, but it was not clear whether it is under control in nursing homes and other long term residential facilities.

The latest data shows that 60.8 per cent of those diagnosed with the virus, some 10,004 people, have recovered, with 3,638 (22.1 per cent) still unwell, and 816 (5 per cent) in hospital. The numbers of deaths per day, Prof Nolan said, has been relatively stable since the end of the first week in April, “a final indication that the disease appears to be under control”.

Despite the positive trends in the data, Prof Nolan emphasised that “while we are on track to get the level of disease down, but we’re certainly not there yet”.

The Government and its public health expert team published seemingly contradictory datasets on public movement on Thursday, with the Chief Medical Officer saying sensor information showed there had been “slippage” in compliance with lockdown protocals.

Pointing to data gleaned from the Dublin Institute for Advanced Studies’ National Seismic Network, which appeared to show an increase in activity in recent days, Dr Tony Holohan said it was “hard evidence that there is more population movement in spite of our continuing advice”.

He also referred to data captured from Apple-made smartphones, which showed an increase in people walking, driving and taking public transport. While he sympathised with the impact unprecedented restrictions are having on people, he emphasised that positive trends in recent data could easily be undone if social distancing and other measures were not observed.

Earlier in the day, the Department of the Taoiseach pointed to data from the National Transport Authority (NTA) which showed the number of cars on Ireland’s road network had fallen by up to 70 per cent compared to the same dates in 2019.

Liz Canavan, the assistant secretary at the Department, said that while there is “anecdotal evidence” in relation to more people being on the roads, TII “undertook an analysis of the traffice figures for this week, and the volumes are in line with the previous weeks since the restrictions were introduced.”

1 Transgender Cork farmer (65) surprised at positive response to telling her story
2 Bobby Storey: The IRA's planner and enforcer who stayed in the shadows
3 Q&A: How close are we to having a Covid-19 vaccine?
4 Covid-19: Travel restrictions unlikely to be lifted before July 20th
5 Fianna Fáil’s return to power marred by appointments carve-up
Real news has value SUBSCRIBE