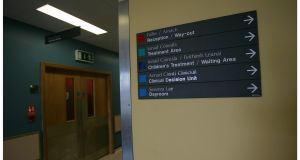 The worsening consultant recruitment and retention crisis is particularly acute at Cork University Hospital (CUH) due to years of failure by Cork politicians to secure investment in the hospital, a leading consultant has claimed.

Consultant rheumatologist Dr Sinead Harney is a member of the Irish Hospital Consultant Association (ICHA) national council, who has worked in hospitals all over the country. She has said CUH is among the worst for consultant retention.

“We currently have 45 vacant consultant positions out of a total of 193 posts – that’s 23 per cent, almost one in four posts which are vacant although 11 of them are filled on a temporary basis,” said Dr Harney.

“It’s particularly bad in my own speciality, rheumatology where we have 2.8 consultants when we need six but it’s also applies to other specialities – gynaecology and urology are also very bad, dermatology slightly better.”

Dr Harney said the problem has been exacerbated in recent times by a number of experienced consultants, all in their mid 40s, opting to leave CUH to work in the privately-owned Bon Secours because of better working conditions.

“We’ve had a lot of resignations – we lost a neurologist before he was 40, and an oncologist, a haematologist and a radiotherapist have all gone to the Bon Secours for better working conditions,” said Dr Harney.

The recruitment and retention crisis was further highlighted recently by the fact there were no applicants for a number of prestigious consultant positions at CUH which previously would have been highly attractive, she said.

“Our very good trainees over the last 10 years have moved to the UK and taken up positions in Oxford, Reading, London – people always go abroad but now they are not coming back when they are fully trained.”

The reason so many of the 30-plus specialities in CUH are having difficulty attracting and retaining consultant staff owes much to the Government’s decision in 2012 to introduce a unilateral salary cut for new recruits, she said.

“The big elephant in the room is the 30 per cent pay differential – I get paid 30 per cent more than one of my colleagues, Dr Grainne Murphy simply because of the different times we both joined – that 30 per cent differential is a huge problem.

“The other problem is that CUH is a difficult place to work because it’s an incredibly busy hospital – it’s easily as busy as all of the Dublin hospitals but it doesn’t seem to get the same level of funding.”

“I come from Sligo where Ray McSharry did an awful lot of good for Sligo General Hospital 30 years ago but I don’t think Cork has had any great advantages politically even when they have had Ministers for Health,” she said.

Dr Harney was speaking in the wake of the publication earlier this month of the Medical Workforce Intelligence Report which found the number of doctors who enrolled on the register in 2018 was the lowest in three years.

The report published by the Medical Council found that of the 2,190 new doctors who enrolled in the register in 2018, just over 10 per cent or 223 were on the specialist register which is made up primarily by those at consultant level.

The report also found the number of voluntary withdrawals on the register increased by 38 per cent to 1,452 in 2018 of which 24 per cent, or 263 of the 1,110 withdrawals, were doctors who were in the Specialist Division.

According to IHCA president, Dr Donal O’Hanlon, the report confirms that the acute hospital system has too few consultants with about 500 permanent posts either vacant or filled on a temporary basis.

“This is resulting in an overstretched work environment and it adversely impacting on the quality and safety of care that doctors and consultants can provide to patients including our unacceptable record waiting lists.”

The HSE South Hospital Group, which is responsible for staffing levels at CUH, was unable to provide a comment in relation to consultant vacancies at the hospital at the time of writing.