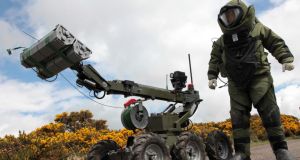 Gardaí in Edenderry received a tip-off on Wednesday that the devices were located in a green area behind a house on the Edenderry to Dublin Road. They called in the army’s Explosive Ordnance team which arrived on scene just after 9pm.

Nearby buildings were evacuated and a cordon was set up. The operation to make the devices safe lasted two hours and involved the use of an army bomb disposal robot. Residents were permitted back into their homes at about 11pm.

Security sources say the devices were crude but viable and contained “energetic material.” They are similar to pipe bombs recently used in an ongoing feud between criminal factions in Longford but gardaí have yet determine if they were made by the same person.

They may also be linked to a “simmering” feud between gangs based in and around Birr and Edenderry, a source said.

Investigators believe the bombs were being stored in the field for future use.

The devices were made safe and have been removed for examination. They will then be handed over to gardaí for forensic analysis.