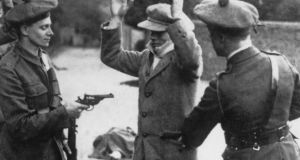 The Black and Tans in operation during the War of Independence. Michael Purtill claimed to have orchestrated an ambush in Kilmorna in which three Black and Tans were killed returning to barracks on April 7th, 1921 though his senior officer contradicted his claim. Photograph: Topical Press Agency/Hulton Archive/Getty Images

An uncle of writer John B Keane had to flee Kerry during the civil war when his barracks was overrun by anti-Treaty republicans.

Michael Purtill was in the National Army upholding the Treaty during the civil war when he and 100 men took a boat across the Shannon estuary to safety in Co Clare in 1922.

The pension files of Purtill, his brother Edward and his sister Hannah Keane, John B’s mother, have all been recently released in the latest tranche from the Military Service Pensions Collection (MSPC).

On Tuesday October 15th, The Irish Times, in conjunction with the Department of Defence, will publish The Revolution Files, a special supplement which will feature highlights from the MSPC.

Michael Purtill’s file is the most detailed of the three siblings. He lists numerous attacks he was involved in while serving with the Ballydonohue Company in Kerry No. 1 Brigade.

He claimed to have orchestrated an ambush in Kilmorna in which three Black and Tans were killed returning to barracks on April 7th, 1921 though his senior officer contradicted his claim by stating that the men involved were injured. After that attack the IRA executed an old man Sir Arthur Vicars who they suspected of passing on information to British forces.

During the civil war, Michael Purtill took the Free State side unlike most IRA men in the county who went over to the anti-Treaty side.

On June 17th 1922 he sustained a fractured shoulder while making preparations to defend the National Army barracks in Listowel from anti-Treaty troops.

When the barracks was overrun, Purtill, then a captain, gathered 100 men together and fled north to Tarbert where they took a boat across and regrouped in Ennis.

Purtill said he later persuaded a number of anti-Treaty rebels to switch sides and was responsible for arresting Con Dee, one of the main anti-Treaty commanders in the area.

He made much of his service on the Treaty side during his application for a pension.

“Now, gentlemen,” he wrote in 1927, “I hope my appeal will receive your favourable consideration. You have reliable evidence before you, my record is clear during the whole time. I have been a strong supporter of the Government since it was formed and on these considerations, I am looking forward to a decision in my favour.”

He was eventually awarded a pension for five years service.

Both sides of John B Keane’s family were steeped in republican politicians. His father Bill was in the old IRA, but never applied for a pension as he already had a pension as a national school teacher.

However, when he died, Hannah Keane successfully applied for a dependent’s allowance as a widow. She also stated that she had been in Cumann na mBan during the war and was awarded a service medal for her efforts during the War of Independence.

Edward Purtill did not succeed in getting a pension for his efforts during the War of Independence which included digging up the body of an IRA volunteer Michael Galvin who had been buried by the Black and Tans. Galvin was reburied in the family graveyard. Edward Purtill took no part in the civil war.

The involvement of the Keane and Purtill families in the revolutionary period have been covered in BBC journalist Fergal Keane’s family memoir Wounds: A Memoir of War and Love which was published two years ago.

Hannah Keane and Michael Purtill were his grandmother and granduncle respectively. “I was never able to ask my grandmother or her brother Mick what they thought of the civil war,” he wrote.

Both went on after the Civil War to become staunch supporters of the Fine Gael party.