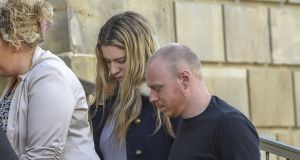 A 24-year-old woman involved in a collision that led to the death of an elderly pedestrian has been given a two-year suspended sentence at Monaghan Circuit Court.

During the sentencing hearing, Judge John Aylmer was told that Callan, who works in a crèche, lost control of her car on a downhill, left-hand bend as she drove towards Ballybay.

Later, the defendant told Sergeant John Maher that her blue Opel Corsa had felt like it was “on ice” during the 11.15am incident and that she did not have control of it.

The car veered across the road and spun clockwise before striking Mr Shannon, of Edenforan, Latton, Co Monaghan, who had been walking on a verge on the opposite side.

The car then came to a halt on Callan’s correct side, but facing the opposite direction. The defendant told Sgt Maher that she had seen a man immediately before the crash, but assumed he had walked away.

Following the spin, Callan had walked across the road to retrieve her vehicle’s petrol cap. Three people came to her aid, and one man even attempted to change a wheel on her car.

However, she made no mention at that point about having seen the man walking on the road. She later told gardaí she did not remember hitting anyone and that she would have sought help if she thought she had.

Neighbours and friends of Mr Shannon’s began searching for him shortly afterwards. His son Finnian recognised his cap lying on the roadside. He then found his father’s body lying in the field beside the hedge.

Callan was uninsured, the court was told. Her car was dangerously defective, with a leaky front-right shock absorber and an imbalance the front axle. The defects led to her losing control, Sgt Maher stated.

In a victim impact statement read out in court by Ronan Shannon, a son of the deceased man, the Shannon family said they were haunted by thoughts of their father’s final hours.

There were unanswered questions, and they wondered why Callan did not call for help or whether their father had lived for long afterwards, the dead man’s son told the court.

In passing sentence on Friday, Judge Aylmer noted that it was accepted by the prosecution that there was no evidence that Callan knew she struck Mr Shannon or left him to die.

The offence merited a three-year sentence, but when mitigating circumstances including her cooperation with gardaí and guilty plea were looked at, this could be reduced to two years, he said.

The judge noted that she did not have any other convictions and was of previous good character, adding that she is the mother of two children, aged one and three years.

Judge Aylmer said he was suspending the two-year sentence for two years, during which time Callan was to enter a €100 bond and keep the peace. She was disqualified from driving for eight years.

Speaking outside the court, the family of the late Mr Shannon said they were “shocked and utterly disappointed” with the ruling. Finnian Shannon, another son, said the sentence was “very lenient”.

Ms Shannon added: “Our father, husband and friend was left dying alone in a field for hours, his basic human rights taken away from him in the most undignified manner imaginable.

“We as a family are haunted by the fact that Daddy didn’t receive any help. If he had, would he still be alive? Did he live for long and how did he die? These are the questions we ask ourselves every day.”

The family thanked local gardaí, especially Sgt Maher and Sgt Tony Campbell, and their neighbours and friends. They expressed hope that no other family would suffer the “devastating effects” of such a loss.