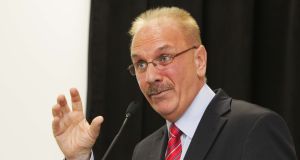 The auditors of disgraced charity Console have been hit with fines and costs orders for tens of thousands of euro following adverse findings by accounting regulators.

The firms – Bermingham & Co and Condron & Associates – were involved in auditing Console for seven years. The investigations followed complaints lodged by the Health Service Executive with two separate regulatory bodies.

According to a HSE report on the results of the regulatory probes, Bermingham & Co has been served with a total of just under €30,000 in fines and costs, while Condron & Associates has been handed a costs order for over €41,000.

Bermingham & Co was investigated by both Institute of Certified Public Accountants in Ireland (CPA Ireland) and the Association of Chartered Certified Accountants (ACCA).

The CPA Ireland investigation found that the firm failed to carry out its work to the proper audit and ethical standards, or with due professional competence and due care to act diligently, as well as not adhering to five different auditing standards, including communicating deficiencies in internal controls to management. The firm was severely reprimanded and ordered to pay a fine of €15,000 and €10,000 in costs.

A separate investigation, by ACCA, delivered a severe reprimand and made a costs order for just over €4,800 against the firm.

Console Ireland was closed down after a HSE internal audit revealed significant deficiencies in how the charity was run, including charities regulation and company law breaches, failure to maintain proper records and inaccurate and incomplete financial statements. It emerged that founder and chief executive Paul Kelly, his wife Patricia and son Tim had spent €500,000 on groceries, clothes and foreign trips.

The ACCA also investigated Condron & Associates after a complaint by the HSE. It found that Joseph Condron had signed audit reports when he had not undertaken work sufficiently – or at all – and that he signed the audit report for Console but failed to refer to the non-disclosure of director’s remuneration, and did not qualify the report.

It found his conduct contrary to the principle of professional competence and due care. He was found guilty of misconduct, severely reprimanded, and was told to pay costs of €41,000.

Neither firm responded to a request for comment on the findings.

The details of the disciplinary findings are contained in a HSE report on its complaints, obtained by The Irish Times under Freedom of Information legislation. The report, by the HSE’s internal audit unit, contains criticism of the regulatory bodies to which the health service made complaints in 2016.

“Considering the notoriety of Console and its very public demise during 2016, it is surprising and disappointing that the RABs [Recognised Accounting Bodies] did not take immediate and unilateral action to launch an investigation into their members’ conduct of Console’s statutory audits but instead only initiated investigations on foot of HSE’s formal complaints.”

The HSE went on to criticise the complaints procedure as conducted by CPA Ireland, which it said “required the complainant to constantly justify its complaint and jump a number of hurdles by providing significantly technical details”.

Responding to the criticism, a CPA Ireland spokeswoman said that it had in fact started its investigation before the HSE complaint. It said that its disciplinary process is “conducted in accordance with the principles of natural justice and is designed to provide fair and due process to both complainants and those against whom complaints are made”.

The ACCA did not respond to a request for comment.