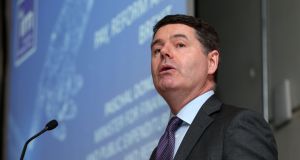 Minister for Finance Paschal Donohoe: Nama says the “best financial return may be achievable only over a longer time horizon than 2020/2021” due to expected zoning and infrastructural initiatives. Photograph: Laura Hutton/The Irish Times

The National Asset Management Agency (Nama) has told the Minister for Finance it could deliver an “significant potential gain” to the State worth up to €400 million if it is allowed a longer lifetime than currently planned.

The State’s toxic loans agency is currently scheduled to be wound down by the end of 2021.

However, confidential briefing notes obtained by The Irish Times show the agency last year told the department of “the merits of retaining Nama in a much-reduced form after 2021” to extract full value from a range of major development sites the agency controls.

“There is a significant potential gain to the State – estimated to be in the range of €200 million-€400 million – from adopting a ‘long-term hold’ strategy towards the strategic sites,” Nama told the department in October last year.

According to the briefing note for Minister for Finance Paschal Donohoe, Nama believes “the best financial return may be achievable only over a longer time horizon than 2020/2021 – this is because of zoning and planning decisions and infrastructural initiatives which are expected in 2023 and in later years”.

The sites are spread across up to eight “debtor exposures”. Nama urged the department to move quickly, telling officials it “needs certainty at an early stage, both in terms of ensuring that it retained expert and experienced staff and from the perspective of debtor management and continued debtor co-operation to achieve these gains”.

The department is conducting an in-depth review of Nama’s strategy for the coming years. The so-called section 227 review must be completed every five years to assess Nama’s progress towards achieving its overall objectives, as well as deciding whether the continuation of Nama is necessary.

The briefing document suggests that department officials were receptive to the idea of extending Nama’s lifetime, stating they “would be very much opposed to a 2020/2021 sale of assets which, if retained for a longer period, could generate a long-term value uplift for the State”.

Asked for comment, a Nama spokesman said that no decision on its wind-down date had been made, and it would be a matter for the Minister in the context of the section 227 review.