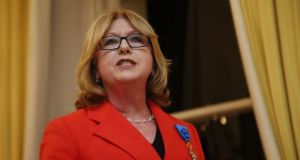 Brexit has offered Ireland an opportunity to recalibrate the Irish unity debate at a “potentially massive” level, former president Mary McAleese has told a seminar on the UK’s withdrawal from the EU.

She said “we are being nudged off the old ‘wrap the green flag around me’ trajectory” into a “much healthier state, into a focus on what our shared future might look like”.

The backstop was not the most important issue for Ireland, she added.

Most important was the protection for the Belfast Agreement then taoiseach Enda Kenny secured in the immediate aftermath of the referendum when all EU member states agreed that if in the future, partition was ended, Northern Ireland could seamlessly re-enter the EU.

It is not about absorption into the Republic but something “really qualitatively different”.

Ireland could also learn from East Germany where unity happened very rapidly without planning or preparation, with a lot of “post event angst” but Ireland could avoid that because there was time to prepare.

Mrs McAleese was speaking at a DCU Brexit Institute seminar on the withdrawal agreement.

She said “we have an opportunity to develop a wholly fresh focus on the future, making it a place of transcendence where multiple identities can be respectfully accommodated, can grow, gathered around the principles of the Good Friday Agreement and values of the EU”.

The debate on Irish unity has conventionally focused on crude numbers and referendums, and on the Catholic/nationalist versus Protestant/unionist divide. Changing demographics will in a relatively short time give Catholics a majority, the former president said.

“Now we have this unexpected but very welcome in many ways opportunity to uncouple the crude numbers game with its very strong elements of winners and losers.”

It was a “quite a remarkable recalibration of the Irish unity debate” and one of “potentially massive proportions”, especially because of the strength of cross community support in Northern Ireland for remaining in the EU.

Describing Brexit as being like pulling a tooth with 10,000 roots, Mrs McAleese said that Plantation and Partition were 17th century and early 20th century decisions but both of them were “deeply implicated” in the withdrawal agreement.

“Plantation and partition were not noble undertakings but they cast long shadows into the centuries ahead. No one then foresaw or cared about the longer-term consequences”, but she added that while the mess was inherited “we surely do not want to keep on recreating it”.

Some day people will be asked to decide by referendum north and south on whether to end partition. Mrs McAleese said “we have duty to ensure groundwork is laid well in advance and that it is not convulsive but that it is convincing”.

They needed to do what Brexit had abjectly failed to do and delve into all 5,000 or 10,000 issues that would be raised by ending partition .

“Those range across a huge spectrum, from fears over identity, to governance and representation, from flags and emblems and anthems to future relationships with the UK.”

Speaking about the withdrawal process at the seminar Professor of European law at Cambridge University Kenneth Armstrong said the way forward was “probably looking like a much longer transition”.

Alternatively, there could be a referendum depending very much on British prime minister Theresa May’s personal opinion.

If the withdrawal agreement “is the only deal on the table she may very reluctantly put it to the people in a referendum. We’ll get be a remain versus May deal.

“She’s very been resistant to that but if if happened it would keep her in office because she’s said she won’t leave until the next phase of negotiations and that would kick the can down the road for a certain number of months and keep her in office for a bit longer.”

A no deal hard Brexit would maximise sovereign autonomy but would result in an annual “hit” of 10 per cent to 12 per cent of the UK’s economy equal to £220 billion a year, Professor of English law at St John’s College Oxford University said.

The dilemma for a soft Brexit is that “you remain bound by EU rules but you have no voice at the table”. He said “you gain some power over migration” ins some versions of a soft Brexit “but I don’t see that as advantageous compared to remaining”.