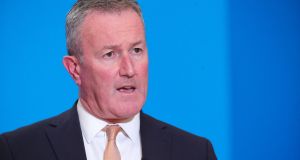 The Sinn Féin finance minister Conor Murphy has declined an opportunity in the Northern Assembly to state that south Armagh murder victim Paul Quinn was not a criminal.

On Monday afternoon on the eve of the 13th anniversary of the murder of 21 year old Mr Quinn the Traditional Unionist Voice leader Jim Allister asked Mr Murphy to say he was not a criminal and “thereby bring some relief to his still grieving parents”.

Mr Murphy said he did not believe the question was relevant to the questions he was taking in the Assembly as finance Minister but nevertheless he said he had made a number of statements on the matter in the past.

“I reiterate and stand over those statements,” said the Minister.

On October 20th, 2007, Mr Quinn, from Cullyhanna in south Armagh, was lured to a barn at Tullycoora, near Oram in Co Monaghan where a group of about 10 men fatally assaulted him with iron and nail-studded bars.

He was so badly beaten that every major bone in his body was broken. The family blamed the IRA for the murder.

After the murder Mr Murphy claimed that Mr Quinn was involved in criminality.

This angered Mr Quinn’s parents Breege and Stephen who demanded that Mr Murphy categorically state he was not a criminal. They also called on him to give information to the Garda and PSNI about IRA members he spoke to in 2007 about the killing.

That became an issue during the general election campaign in the South in February this year. Shortly before polling day Mr Murphy “unreservedly” withdrew and apologised for his 2007 remarks.

Mrs Quinn said he did not go far enough and asked that he bluntly state her son was not a criminal. At least one Sinn Féin source said that that was implicit in Mr Murphy’s statement although the family argued it was far from clear that was Mr Murphy’s position.

In the Assembly chamber on Monday Mr Allister repeated his request to Mr Murphy.

“The Minister has never acknowledged Paul Quinn was not a criminal. He knows that is what is required to unlock this matter,” said Mr Allister.

“Why can he not find it within himself, who holds a position of real authority, why can he not offer that to an ordinary family in south Armagh the knowledge their son was not a criminal?”

Mr Murphy repeated that he had made a number of statements that he stood over. He said his previous offer to meet and discuss the matter with the Quinn family still stands.