‘If people don’t buy into this, it is never going to stop, no matter how many levels you go to’ 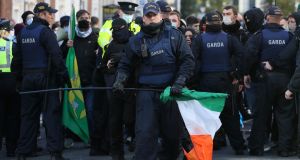 ‘You need to enforce the rules.’ Photograph: Brian Lawless/PA Wire

Too many contacts. That is why Level 3 did not work, experts say, and why more severe public restrictions being set by the Government will not work either without greater public buy-in or enforcement.

After four weeks of life under Level 3 in Dublin, three weeks in Donegal and two weeks for the rest of the country, the Government finally admitted at the weekend that the restrictions were not working. The number of infections has continued to increase sharply over the past month.

“The problem is that people are continuing to have too many contacts and the virus is in the community and it is continuing to spread,” says UCC professor of epidemiology Patricia Kearney.

Despite calls from the National Public Health Emergency Team on the public to reduce discretionary contacts, average close contacts for infected people fell slightly on last month but it still remains above five per person, well above an average of two after the March-April lockdown.

Videos of crowds after sports games or scenes of busy gatherings on public streets provided the visual evidence supporting what the Covid-19 incidence rates were showing.

To complicate matters, contact tracers have been reporting lengthy and challenging calls, including longer “Call Three” conversations with contacts of infected people to convince them to go for testing and to isolate and that they risk infecting others even if they are asymptomatic.

“If people don’t buy into this, it is never going to stop, no matter how many levels of lockdown you go to. If people don’t adhere to the guidelines, then it is not going to stop the transmission of the virus,” says Kingston Mills, professor of experimental immunology at Trinity College Dublin.

“If you go to Level 5 and people don’t buy into it, it won’t work either. All it is doing is delaying the inevitable, which is it will continue to spread.”

The recent well-publicised case studies of unrestrained community spread, including the man who failed to restrict his movements after a trip abroad and infected at least 56 people, including up to 10 households and a sports team, show the need to explain repeatedly the importance of self-isolating to the public and the requirement for enforcement where the rules are not obeyed.

The Government has said it is looking at introducing fines to enforce Covid-19 restrictions. Across the Border in Northern Ireland, there are fines for failing to adhere to public measures.

“You need to enforce the rules and you need to make it mandatory for people to take the test if they are called or to isolate,” says Mills. “Without that, it just is not going to work.”

Saliva testing, which is less invasive and faster than back-of-nose swabs, may also encourage more people to come forward for testing and help improve public compliance, he said.

The restriction level set by Government will guide the public on the different ways it must comply but the overarching message remains the same.

“We really need to have very high levels of restrictions to get the virus under control because clearly we have uncontrolled community transmission,” says Prof Kearney.