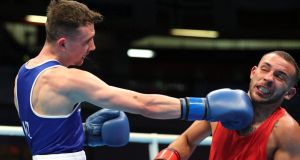 Irish flyweight Brendan Irvine became the first Irish boxer to qualify for Tokyo 2020 on a chaotic day in the Copper Box Arena in London.

As the European leg of the Olympic qualification tournament was brought to a close mid-session on Monday by the International Olympic Committee Boxing Task Force (BTF) because of concerns over Covid-19, Irvine stepped up in the evening session to dominate his bout against Hungary’s Istavan Szaka.

The Belfast 23-year-old won impressively by unanimous decision in a demonstration of power boxing, dominating Szaka from the beginning to win all three rounds for a place in his second Olympic Games after Rio 2016.

Irish featherweight Kurt Walker, seeded two for the event, arrived in shortly after Irvine and lost to German Hamsat Shadalov by unanimous decision in a disappointing return for the 2017 European bronze medallist.

High performance director for Irish boxing, Bernard Dunne, said he was disappointed by the way the qualifying tournament was postponed mid-session on the third day.

“It is disappointing,” said Dunne. “They should have waited [to announce the postponement] until all the boxing was completed. There are no dates as to when they will run them again, no clarity on that yet.

“I am surprised we started the tournament. They should not have run the tournament or else let it run to a point, where the qualifiers were known.”

The news was relayed to the boxers during a break between the afternoon and evening sessions on Monday. Irish boxing officials understand that when the qualifier recommences, it will start from where the current tournament has finished.

The IOC Boxing Task Force, who have taken over running Olympic boxing issued a statement saying travel restrictions brought about by the coronavirus pandemic forced their hand.

“The BTF eventually took the decision to suspend the event today, amid increasing global travel restrictions and quarantine measures, in order to allow the participants from over 60 countries to adjust their travel plans and return home,” it said.

“The BTF will continue to evaluate the situation daily, aiming to complete the distribution of the remaining Tokyo 2020 boxing quota places in May and June.”

The London event was the European qualifier and started on March 14th. It was scheduled to run until March 24th. Up to 350 men and women from as many as 50 countries were taking part in what was the first opportunity for boxers from Europe to qualify for Tokyo 2020.

Keith Duggan: Bubba Wallace tweet shows just how troubled Donald Trump’s mind is 07:00
Ian O’Riordan: Fear and loathing on the Olympic nostalgia trail 06:00
Andy Moran on moving on from a Mayo career that glowed golden to the end 06:00
Dettori bidding to guide Sceptical to fairytale Grade One glory 06:00
Five of the best deals for Irish golfers at top courses this summer 06:00
Here is your handy guide to sport on television this week