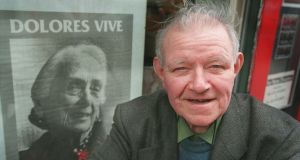 Michael O’Riordan volunteered to fight against Franco without any expectation of the war being won. Photograph: Alan Betson

Irish communist leader Michael O’Riordan went to fight with the International Brigades in the Spanish Civil War even though he believed the fight for the Spanish republic was already lost, his son Manus has revealed.

Speaking at a lecture to mark the 100th anniversary of his father’s birth last weekend, Mr O’Riordan said his father believed the Spanish republic would fall to Franco’s fascist forces when he went to Spain in March 1938. But his sympathies had been with the democratically-elected republican government from the outset of the war in July 1936.

“He was due to go in 1937, but he got appendicitis, so he went the following year, but before he went he actually said ‘I already knew the war was lost because of the amount of aid that Hitler and Mussolini were giving Franco and the lack of support for the republic from Britain and France’,” Mr O’Riordan said.

“But he still felt honour-bound having volunteered to go, so he went out without any expectation of the war being won by any action he took - he thought perhaps the republic could hold out a little bit longer and there might be some change if something dramatic happened elsewhere in Europe.”

Mr O’Riordan said his father thought, perhaps, Britain and France as democracies might come in and support the republic, which should have happened when Hitler invaded Czechoslovakia in 1938, but “they just stood by and the Spanish republic finally fell in July 1939”.

Speaking at a lecture at Cork City Library to mark his father’s birth on November 12th, 1917, just days after the Russian Revolution, Mr O’Riordan said his father joked that the guns of the cruiser, Aurora, firing on the Winter Palace in St Petersburg brought on his premature birth in Cork.

First joining Fianna Éireann as a teenager in Cork, Michael O’Riordan later joined the IRA. He was in the IRA when he became a communist, under the influence of Sean Nolan whom he met at a Wolfe Tone commemoration in Bodenstown, said Mr O’Riordan.

“His commander in the British Battalion was a man from Manchester called Sam Wild and when the Republican forces mounted one last offensive to regain ground lost to the Fascists on the Aragon Front, Sam Wild gave each company a Spanish flag and a Catalan flag as they crossed the Ebro,” Mr O’Riordan said.

“Sam said to my father it was important an Irishman carry the Catalan flag as they crossed the Ebro into Catalonia, which sounds very romantic, but when I asked my father what he did with the flag, he said he gave it to the first liberated Catalan he found as it made him a sitting duck for snipers.”

Wounded by shrapnel while defending Hill 481 during the Battle of the Ebro, Michael O’Riordan was invalided back to Barcelona. There he witnessed La Passionara, Dolores Ibarruri make her famous “You are history, You are Legend’ speech to the departing international Brigades, in November 1938.

Although the Republicans lost the civil war, Michael O’Riordan was deeply honoured when the Spanish Parliament voted in 1996 to offer Spanish citizenship to all surviving International Brigadiers who had come to Spain to help defend the Spanish Republic, said Mr O’Riordan.

“Spain was a huge part of my father’s life and he was very moved by that and he was delighted when Christy Moore wrote Viva La Quince Brigada, which was inspired by his book about the Irish involvement in the International Brigades, Connolly Column which he wrote in 1979.

“When he died in 2006, we scattered some of his ashes in Carlingford Lough where we had scattered my mother, Kay’s ashes in 1991, but we brought another part of his ashes back to Spain and scattered them at the very spot where he had crossed the Ebro with the Catalan flag in 1938.”