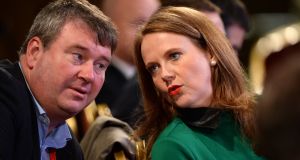 Senator Catherine Noone said that the Oireachtas committee had found it difficult to find expert medical witnesses who wanted the Eighth Amendment retained in its present form. Photograph: Dara Mac Dónaill / The Irish Times

The National Women’s Council, the largest representative organisation for women in Ireland, will launch a campaign this week to appeal to the “middle ground” in the abortion debate.

The campaign, called “Every Woman”, will move away from the themes of choice and rights, and focus on women’s needs and the realities of their lives, according to people familiar with it.

During research and consultation with its 170 member organisations, the National Women’s Council (NWCI) found that its members were not speaking about abortion as a human rights issue, but rather as a need that some women experienced in their lives.

It intends to make a pitch for what it sees as the middle ground in the abortion debate, accepting restrictions on abortion after the early period.

However, anti-abortion groups are likely to reject the characterisation of the middle ground, as the vast majority of abortions take place with the first 12 weeks of pregnancy.

Polling over the last year carried out by The Irish Times suggests that there is a strong appetite for reform of Ireland’s strict prohibition on abortion but voters are wary of a UK-style regime.

“The main thing for us is to reflect the conversations we’ve been having with women over the last year,” said the NWCI director Orla O’Connor. “For women it’s not a political issue. It’s a personal and private one.”

Abortion is just one part of women’s reproductive healthcare needs, a draft of the document, which has been seen by The Irish Times, says.

Meanwhile, Sinn Féin TDs have distanced themselves from the views of their colleague Peadar Tóibín, who on Sunday criticised the Oireachtas Committee on the Eighth Amendment for an imbalance in its list of witnesses.

Mr Tóibín, who was suspended from the parliamentary party for six months in 2013 when he voted against the Protection of Life in Pregnancy Bill, holds anti-abortion views and was critical of the number of witnesses favouring repeal of the amendment compared to the numbers of those in favour of retention.

The imbalance has been caused by pro-life groups refusing to appear before the committee. Don’t cry over spilt milk when you intentionally spilt it yourself just so you can cry

“It’s natural that TDs would seek to bring in witnesses that would further their political objectives on committees, but when you look at the balance of the members and also the witnesses, 24 witnesses are pro-choice and four witnesses are pro-life,” he told RTÉ’s Week in Politics. “I’m a chair of a committee, and even on issues that I wouldn’t agree with I would make sure there’s a balance of people coming before a committee so that there’s a good honest debate.”

But Sinn Féin TDs Jonathan O’Brien, who is a member of the committee, and Eoin Ó Broin criticised Mr Tóibín’s comments.

“The imbalance has been caused by pro-life groups refusing to appear before the committee. Don’t cry over spilt milk when you intentionally spilt it yourself just so you can cry,” Mr O’Brien said in a tweet.

Some anti-abortion witnesses, including professor of psychology Patricia Casey, have declined to appear before the committee as they believe that its outcome is pre-determined in recommending a repeal of the Eighth Amendment.

Mr Ó Broin also tweeted that his remarks did not represent the Sinn Féin view of the committee. He said he was “disappointed” that Mr Tóibín “has aligned himself with Mattie McGrath & Rónán Mullen in trying to undermine the work of Committee & SF reps on it”.

Mr McGrath and Mr Mullen, both members of the committee, have been highly critical of the imbalance in the witness list.

Speaking at the Fine Gael national conference at the weekend, the committee’s chairwoman Senator Catherine Noone, said that the committee had found it difficult to find expert medical witnesses who wanted the Eighth Amendment – which places the mother and unborn’s life on a equal footing and underpins Ireland’s strict anti-abortion laws – retained in its present form.

“So far (and it seems that will remain the case) we have really struggled to get experts in the medical area to come to the committee to state that the status quo should be maintained,” Ms Noone told an abortion debate at the Fine Gael conference.

The committee’s hearings continue this week with witnesses from the HSE and the Irish Family Planning Association, which has long campaigned for a change in Ireland’s law on abortion.

Sinn Féin is due to debate its policy on abortion at next weekend’s ardfheis in Dublin.