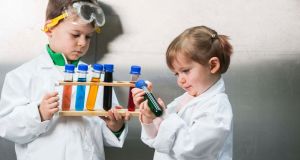 Major differences between the Irish public and Irish scientists on the cause of climate change, the safety of vaccinations and the origins of the universe are highlighted in a survey of attitudes to science.

Only 68 per cent of the public agree “climate change is mostly due to human activity”, while 92 per cent of scientists agree with that view.

Asked if the Earth is getting warmer as a result of climate change, 69 per cent of the public agree compared to 92 per cent of scientists, according to the Amárach Research poll.

On other topics, only 64 per cent of the Irish public agree or strongly agree that “vaccinations are an acceptable form of preventative medical treatment”. In contrast, 85 per cent of scientists agree with their benefits.

Science Foundation Ireland commissioned the research, coinciding with Science Week Ireland 2017, to measure and compare opinions of the general public and the science community in Ireland.

It was conducted with 1,000 adults and 238 scientists – based on a research format applied elsewhere by the non-partisan think tank the Pew Research Centre.

On the issue of “broad agreement within the science community about the causes of climate change”, only 56 per cent of the public agree this is the case; the equivalent figure among scientists is 89 per cent.

Some 72 per cent of the public agree “wind turbines are an acceptable form of energy” while 91 per cent of scientists agree with the benefits of this renewable energy source.

The issue of genetically modified foods also marked a big difference in attitudes between public and the scientific community: only 22 per cent of the public agree it is safe to eat GM foods, while 62 per cent of scientists agree they are safe.

Significantly, however, 43 per cent of the public believe GM foods are unsafe; a view held by 14 per cent of scientists – while the benefits of GM foods are disputed, there is no widely accepted scientific view that they are unsafe to consume.

Other notable findings include:

- 54 per cent of the public and 33 per cent of scientists believe it’s unsafe to eat foods with pesticides;

- While 90 per cent of Irish scientists support the bioengineering of artificial organs for use in human transplantation, only 56 per cent of the public favour such technology;

- 62 per cent of the public agree or strongly agree there is not enough science education in schools; the equivalent figure among scientists is 74 per cent; and

- 64 per cent of the public agree science has had a positive impact on people’s lives in Ireland, compared to 89 per cent of scientists.

While there were large majorities agreeing on the benefits of science’s positive impact on healthcare, food, the environment, education and quality of life, significantly fewer members of the public and scientists agree it has brought benefits in transport and family life.

SFI director of strategy and communications Dr Ruth Freeman said Science Week, taking place up to November 19th, was “a brilliant opportunity to explore the world of science and technology that surrounds us all, to understand more about how it is playing an increasing role in our lives and to learn about Ireland’s brilliant science heritage as well as discoveries being made in Ireland every day”.

People are being encouraged to ask their questions on social media, “whether it’s: ‘why do I experience fear?’, ‘how can I kick the perfect penalty?’ or even ‘is there any truth to the sunny southeast?’” The aim of the #StopAndAsk campaign was to enable people to make sense of the world around them and to facilitate conversations between the general public and the scientific community in Ireland, Dr Freeman said.