In 1943, 75% of children born at Bessborough Mother and Baby home in Cork died before they turning one 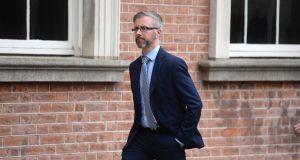 Roderic O’Gorman: he has written to An Bord Pleanála asking it to “take account” of “unresolved questions” about possible burials on the Bessborough site. Photograph: Dara Mac Donaill

The Commission of Investigation into Mother and Baby Homes expressed doubt that a religious order had no knowledge where the majority of some 900 babies who died at its institution were buried.

Bessborough in Blackrock, Cork, was run by the Congregation of the Sacred Hearts of Jesus and Mary from 1922 until 1998, with 9,768 women and 8,938 children passing through it. Of those children some 923 died as infants.

In 1934 the home had the highest recorded infant mortality rate of any in the State. The situation continued to deteriorate in the 1940s and peaked in 1943, when 75 per cent of children born there died before turning one.

The commission said the congregation failed to keep a register of infant burials at Bessborough, and the burial location of the majority of children who died there is unknown.

“The commission finds it very hard to believe that there is no one in that congregation who does not have some knowledge of the burial places of the children,” the report states, adding that it was “perplexed and concerned” at the congregation’s response on the matter.

The issue of the high infant mortality rate in Bessborough was highlighted by Alice Litster, an inspector at the Department of Local Government and Public Health, who visited the home regularly during the 1940s and 1950s.

Ms Litster reported that in the year ending March 31st, 1943, some 114 children were admitted to Bessborough and 70 had died with all but one of these deaths occurring in infants aged under one.

She identified the unsatisfactory milk supply to the home and the failure to breastfeed as the main causes of the high death rate and the unhealthy condition of the children.

She said the cows that supplied milk to Bessborough were not tested for tuberculosis, and the milk produced was not to subject to the same standards governing the general milk supply.

In April 1944, the congregation notified the department that 102 infant deaths occurred between April 1st, 1943, and March 31st, 1944, with 96 per cent among infants aged less than four months.

The commission noted that individuals and organisations had made suggestions about possible sites for children’s graves, and said it was highly likely the burials did take place in the grounds of the home. It said the only way this could be established would be through an excavation of the entire property, including areas now built upon.

A developer has applied for planning permission to build 246 residential units on a 3.7 acre site at the former home.

The Cork Survivors and Supporters Alliance, which represents more than 50 families of children who died at Bessborough, have lodged objections to the planning application for the development.

Minister for Children Roderic O’Gorman has written to An Bord Pleanála asking it to “take account” of “unresolved questions” about possible burials on the site.

5 Mary Robinson says she was ‘misled’ in Princess Latifa case