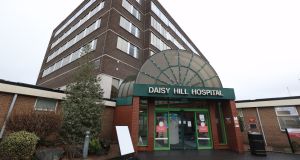 The North’s health department plans to have up to one million people vaccinated against Covid-19 by the spring, senior officials said on Tuesday.

The officials did not cite a specific date for the completion of that spring rollout but the North’s chief medical officer Dr Michael McBride predicted that “by Easter we will be in a different place”.

At a Zoom press briefing on Tuesday afternoon Patricia Donnelly, head of the North’s vaccine programme, also reported that by February it is planned that up to 633,000 people will be vaccinated, which is more than one-third of the Northern Ireland population of 1.8 million people.

She added that the hope was that the general adult population, those aged 18 and over, would be vaccinated by the “beginning of the summer” with a further 400,000 inoculations.

She entered the caveat that these predictions depended on the delivery of vaccines to Northern Ireland.

Ms Donnelly said that the number of people inoculated to date is “approaching 100,000” with about 86,000 receiving a first vaccination and up to 14,000 receiving two jabs.

The health officials said that if the pandemic was dealt with that coronavirus would then become endemic in society. Thereafter, said Ms Donnelly, annual or biannual vaccinations would be required.

Dr McBride and the North’s chief scientific adviser Professor Ian Young however strongly warned against complacency, particularly with the current pressures on the health service and on hospitals, but nonetheless acknowledged that there was real “hope” in the months ahead.

Dr McBride noted how the battle against Covid had been described as a “race between infections and injections” and while they were not yet “in the home straight” significant progress was “tantalisingly close”.

In the meantime Dr McBride said the message remained “stay at home” as hospital admissions continue to rise.

On Tuesday afternoon the North’s health department reported 22 more coronavirus deaths taking the total since the outbreak of the pandemic to 1,498.

The department also reported that there are now 785 patients receiving Covid-19 treatment in Northern Ireland hospitals with 55 in intensive care and 38 on ventilators.

The North’s health Minister Robin Swann on Tuesday briefed Executive Ministers on the increasing pressures on the health service and on hospitals due to the high incidence of coronavirus.

While Northern Ireland appears to be past the peak of the current surge the lag between people becoming infected and some needing hospital treatment means that hospital admissions will continue to rise. The R rate of infection number has dropped to about 1.2 from an estimated 1.8 in early January

The North’s six health trusts warned that by the third week in January already-stretched hospitals could be dealing with double the current number of coronavirus patients.

Ms O’Neill said that in terms of Covid, Northern Ireland was “in for a very rough number of months ahead”.

Northern Ireland currently is in a six-week lockdown that is due to end on February 6th. Health chiefs have indicated that this lockdown may need to be extended.

At the press conference Ms Foster expressed disappointment that some employers and business owners were requiring their staff to attend work when people can work from home, while some businesses should not be open at all. “That’s quite a selfish spirit I have to say, and it’s not going to help us to beat the virus and keep people safe,” she said.