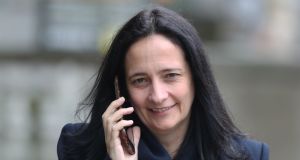 Catherine Martin is understood to have raised the issue of Department of Health pay rise at Cabinet. Photograph: Nick Bradshaw/The Irish Times

Minister for Culture Catherine Martin raised the €90,000-plus salary increase for the next head of the Department of Health at the cabinet meeting today, telling Taoiseach Micheál Martin that figures of that scale should be disclosed at Cabinet.

Multiple sources with knowledge of the meeting said that Ms Martin, who is deputy leader of the Green Party, told her colleagues that the amount of the salary should have been divulged to colleagues at last week’s Cabinet meeting.

It is understood that Taoiseach Micheál Martin read out a list of changes to secretary general roles at Cabinet last week, including the fact that Robert Watt, who was until last week head of the Department of Public Expenditure and Reform, would be filling the post on an interim basis.

The Taoiseach also said that there would be an open process for the role in the Department of Health, and that an enhanced salary would be part of the package. However, he did not mention the figure concerned.

The new secretary general will make €292,000 per year, the highest-paid civil servant in the State. Mr Watt is earning his old salary, of €211,000 per year, while he works in the role on an interim basis. An open competition for the role is to take place before it is filled.

It is understood Ms Martin raised the issue at the meeting today, with the Taoiseach responding by pointing out the centrality of the health and reform agenda to the Government’s work, as well as the importance of attracting the right candidate due to the need to manage the impact of Covid.

A spokesman for Ms Martin said “the Minister does not comment on confidential Cabinet matters”.