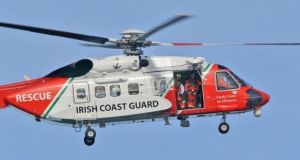 The two surfers were winched on board the helicopter and were brought to Sligo Airport by the Irish Coast Guard. File photograph: Collins

The Irish Coast Guard rescued two surfers went out to sea on Saturday during Storm Jorge.

The Rescue helicopter II8 was scrambled at 10.30am on Saturday after receiving a call from a member of the public that somebody in the water off the coast of Co Sligo was in trouble.

Another surfer who was on the shoreline went out to rescue the man who had lost his surfboard and was struggling in the water.

Both of them clung to the remaining surfboard. The incident happened in west Sligo in an area popular with surfers.

“We initially thought the surfers were making their own way ashore. They seemed to be making slow progress and they indicated they needed assistance,” a Coast Guard spokesman said.

The two surfers were winched on board the helicopter and they were brought to Sligo Airport.

They were met at the airport by an ambulance which took them to Sligo General Hospital.

“They were stable, but they had to be checked up,” the spokesman said.

An orange level warning is issued by Met Éireann for wind speeds with the capacity to produce dangerous, stormy conditions which may constitute a risk to life and property.

People are advised to stay away from exposed coastal areas during that period.

The Coast Guard also reiterated its warning that people should avoid coastal activities during storm conditions.

The rescue provoked a great deal of anger on the Irish Coast Guard’s Facebook and Twitter pages. Many members of the public stated that those who ignore weather warnings should be made pay the costs of their rescue.

Rebecca Shannon wrote on Twitter: “Such selfish carry on. Total disregard for anyone but their own wants. If people don’t heed the warnings and choose to take the risk they should absolutely be handed the bill. That would soon put a stop to this nonsense.”

Another David McCarthy stated: “How is it that the Fire Brigade and Ambulance service can send you out a bill but the Coast guard don’t??? How much must it cost to launch a life boat or have a chopper take off.”

Others believed that they should face criminal prosecution for ignoring the warnings.

In October 2017 five windsurfers had to be rescued off the coast of Co Louth during Storm Ophelia when a red weather alert was in place for the whole country. At the time Taoiseach Leo Varadkar said the idea of making it a criminal offence to ignore weather warnings was “something that merits consideration”.

To date no law has been introduced to deal with the situation.