Victims of Louth crash were mother, son and young man from Newry

Man in his 20s arrested over fatal crash near Border 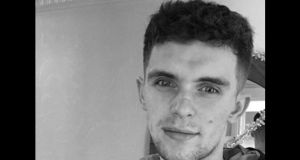 Gardaí investigating a road traffic crash in Co Louth in which three people were killed believe the driver of one of the vehicles left the scene.

A suspect has since been arrested and was being questioned in Dundalk Garda station where the investigation into the collision is based.

The arrested man went to the Garda station early on Sunday afternoon and presented himself for questioning, leading to his arrest on suspicion of dangerous driving causing death.

The crash happened at about 2.15am on Saturday on the N1 at Carrickarnan, south of Junction 20 on the main Dublin to Belfast road.

An elderly woman and her son were in one vehicle and both died. They have been named as Mary Faxton (88) and Kevin Faxton (58), from Bessbrook near Newry.

The other vehicle was carrying at least three men in their 20s; one of whom, Bryan Magill (25), was killed, another injured and the third, believed to be the driver, who left the scene. The injured man was taken to Our Lady of Lourdes Hospital in Drogheda. His injuries are not thought to be life-threatening.

The third man in the second car with Mr Magill and the man who was injured was not at the scene when gardaí arrived.

It appears both cars were being driven northwards when one caught the other on the road and the crash occurred.

All three of the deceased were pronounced dead at the scene and all of the people in the two cars are from Northern Ireland. The Irish Times understands the suspect arrested is from south Armagh.

The investigation was now focussed on the car Mr Magill was in and how it was being driven at the time, including what speed it was travelling at compared to the Faxton’s car when it hit the back of their car.

Gardaí said on Sunday afternoon a man in his 20s had been arrested in relation to the Louth crash and was being held in Dundalk Garda Station under Section 4 of the Criminal Justice Act.

Seven people in total died on Ireland’s roads at the weekend.

A teenage girl, a passenger, died following a fatal single vehicle road collision which occurred at about 1.15am Sunday morning in Porridgetown, Oughterard, Co Galway on Sunday morning. The driver of the car, a 21-year-old man was uninjured.

A male pedestrian in his 20s died following a crash involving a lorry at about 11.15am Saturday morning in Monaghan. The crash happened on the N54 between Monaghan town and Clones in the townland of Bandrum. The lorry driver was uninjured.

On Friday night, the driver and passenger of a car travelling in Co Cavan were killed in a road crash. Both of the vehicle’s occupants were aged in their 60s. They were pronounced dead at the scene of the collision in Ballinagh shortly after emergency services arrived.

Road Safety Authority chairwoman Liz O’Donnell said road deaths had fallen significantly since the State agency was set up in 2006 but that it intended to target the “killer behaviours” of speed, drink- and drug-driving and mobile phone use to reduce fatalities further.

“We were doing well. We were down on last year and then to have an event like this where you have multiple fatalities, which is terrible,” said the former junior minister.

“It is a tragedy for the individual families and communities. We just have to keep at it and not be complacent about our success so far in reducing fatalities.”

Deaths could be reduced further by people driving just 10 kilometres per hour slower, said Ms O’Donnell. It was a case of “going back to basics” in trying to reduce road deaths further by raising public awareness around the most serious causes of road traffic accidents, she said.

“Speed and drink are the main killers and distracted driving with mobile phone use,” she said.

A growing number of road deaths involving drink-driving are also showing drug use, she added.

The majority of road deaths were from “recreational” road use and took place between the hours of 10pm and 6am over weekends with Sundays being the worst day for road accidents.

There were 148 deaths on Irish roads in 2019, a 4 per cent increase on the 142 people killed the previous year, the safest year on record.