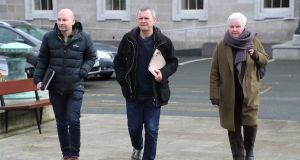 The Labour Party will be again asked to enter government-formation talks as left-wing parties continue their efforts to build a potential minority government.

The Solidarity People Before Profit Group held discussions with Sinn Féin on housing and finance on Friday morning. They were joined by Independents Joan Collins, Thomas Pringle and Catherine Connolly.

During the meeting, People Before Profit TD Bríd Smith asked Sinn Féin for details on how measures in relation to housing, for example, would be funded.

Speaking afterwards, Richard Boyd Barrett said efforts to reach out to Labour – who have ruled themselves out of government – will likely be made in the coming weeks.

“Anybody who considers themselves even vaguely left wing in this country has for decades yearned for the realignment of Irish politics, where there would actually be a left that was viable as a government that didn’t involve propping up Fianna Fáil and Fine Gael. And to me it’s a bit bizarre when, for the first time in Irish political history, there is actually a possibility of a left government that people who describe themselves as left have taken themselves off the pitch. And I think they should really reconsider that,” said Mr Boyd Barrett.

He said Solidarity and People Before Profit will probably have to ask Labour to change its stance on remaining outside the fray.

Mr Boyd Barrett said the group also raised the prospect with Sinn Féin of mobilising against the possibility of a return to power of Fianna Fáil and Fine Gael.

A demonstration is due to be held on March 7th calling for a change to Ireland’s government.

“We will be actively promoting and building that demonstration over the next week. Sinn Féin at this point are not supporting that mobilisation, although they’re not hostile to it. But we think that is an important point of pressure.”

He said that financing new measures on housing was a topic of discussion on Friday morning.

“Bríd [Smith] raised issue of how would we fund a lot of the measures in terms of the public and affordable houses. Bríd pointed out that we need the money to do that and that we should think about fairly far-reaching taxes on the vulture funds, on the property speculators and the land hoarders – the people who’ve made money from the housing crisis. It is not clear to us what Sinn Féin’s plans are in that regard. So we need to explore that a bit further, but at this point I think there’s a lot of common ground.”

Fine Gael and Fianna Fáil are due to meet next week for policy discussions. Party leaders Micheál Martin and Leo Varadkar are also expected to have a further conversation after that meeting. Most other parties will also continue discussions next week.