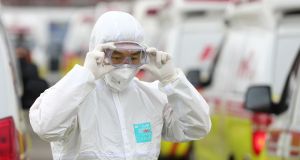 A man who had travelled from an affected area of Northern Italy was being treated in a Dublin hospital on Sunday after he was diagnosed with coronavirus on Saturday.

The man had returned from Italy and, after feeling unwell, it is understood he presented himself at a Dublin hospital where he was met by healthcare staff who were wearing hazmat type clothing.

He was taken to the isolation unit of the hospital where treatment started immediately. His condition or the severity of his symptoms are not known.

He became the first confirmed case of the virus in the Republic, following the confirmation of a occurrence of the illness in Northern Ireland earlier this week.

Public health officials are trying to trace anybody who came into contact with the man since his return from Italy. This search will initially focus on people who were in close contact with the man. This is defined as being within two metres of the man for more than 15 minutes.

They will also attempt to establish where the man has been in Ireland while he was ill to help in the contact-tracing effort.

Healthcare staff treating the man, even though they will be fully gowned while doing so, are considered to be casual contacts requiring monitoring over the coming two weeks.

Coronavirus or Covid-19 has spread rapidly around the world since its outbreak in China. Thousands of people have died from the virus, mostly in China. It has lead to international concern and has sparked travel restrictions, the cancellation of public events and stock markets to plunge.

The Department of Health announced the Republic’s first case on Saturday night. “The patient was identified and tested in line with established protocols for the investigation of suspect cases of Covid-19,” the department said in a statement shortly before 9pm.

“The case is associated with travel from an affected area in northern Italy, rather than contact with another confirmed case.”

Speaking at a press briefing in Dublin on Saturday night, officials said the process of getting in touch with people who were in contact with the man started immediately. “This process will take some time, but the people who need to be contacted will be contacted,” said Dr John Cuddihy, director of the Health Protection Surveillance Centre.

Those in contact with the case are being identified and will be contacted by Public Health doctors in line with best international practice.

The person who had contracted the disease followed the advice of public health authorities and identified himself, enabling the diagnosis to be made, chief medical officer at the Department of Health, Dr Tony Holohan said.

“We are confident the systems we have in place, and that we’ve worked on for months, will work well,” he said.

Dr Holohan said officials had to be careful about the amount of information provided. The reason for not providing more information was to protect the identity of the person affected and to avoid the person being identified publicly. This would lead to a feeling among the public that their privacy would not be protected in the event that they contacted the disease.

Dr Holohan, said the case was not a surprise and had not changed the view of officials about containing the disease. “There is still a high likelihood of containing the spread of this disease. We still have a high degree of confidence. The change of developing the disease in this country is extremely low”.

On Sunday morning the HSE said in a tweet that “the risk to the general public is still low. This risk may change. People may continue to go to work, school, as usual.”

Up to last Friday, 115 tests had been carried out on suspected cases of the coronavirus, but all proved negative up to that point.

The Department of health said Minister for Health Simon Harris had been informed of the case and has notified Taoiseach Leo Varadkar.

Speaking on Saturday, Mr Harris said: “This is not unexpected. We have been preparing for this since January.

“I would strongly encourage people to follow the guidance and advice of the National Public Health Emergency Team, led by the chief medical officer.”

Mr Varadkar and Mr Harris earlier held a conference call with their counterparts in Northern Ireland on Saturday as the unidentified woman in Northern Ireland who recently came home from Italy and was suspected of being infected with the Covid-19 or new coronavirus, had her case confirmed.

They discussed the situation regarding the virus on the island of Ireland, and also internationally, and noted the good co-operation in place between authorities north and south of the Border.

All agreed to continue the close co-operation and to remain in close contact in the period ahead, the statement said.

On Saturday the NI Public Health Agency (PHA) said it had received notification from its counterparts in England that the one presumptive case of coronavirus in Northern Ireland had been confirmed by the reference laboratory it was sent to.

The family at the centre of the case has asked that their privacy is respected given the personal impact of this issue, a PHA statement said.

The public in Northern Ireland have been advised that they have full access to the National Health Service’s 111 helpline, though the British service is only being made available for people from Northern Ireland in relation to coronavirus guidance and not for other conditions.

Sinn Féin MLA Colm Gildernew welcomed the high-level meeting. The party health spokesman said: “It is essential that public health authorities north and south work closely together and co-operate and community effectively in order to deal with this health emergency.

“Infections don’t recognise barriers or borders and neither should our approach.”