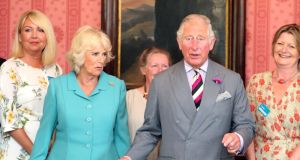 The Prince of Wales and the Duchess of Cornwall underneath a portrait of Daniel O’Connell with his living relatives as they are shown around Derrynane House. Photograph: Niall Carson/PA 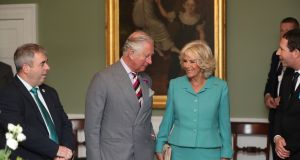 The Prince of Wales and the Duchess of Cornwall shown around Derrynane House. Photograph: Niall Carson/PA Wire

It had been threatening to rain all morning but the smudges of grey clouds began to clear over Bunavalla and the sun emerged, watery but welcome, just as the claret coloured helicopter carrying the royal couple soared into view over Derrynane House at Caherdaniel in south Kerry.

The ancestral home of Daniel O’Connell was the first stop for Charles, the Prince of Wales and his wife Camilla, the Duchess of Cornwall, in Kerry.

From the moment the prince’s helicopter landed on the grassy banks overlooking the dunes, it was evident that he was as enthusiastic about visiting the Kingdom as he was about visiting Cork.

Flanked by Minister of State for the OPW and Flood Relief Kevin Boxer Moran, Prince Charles and Camilla - who was stylishly attired in a turquoise green outfit, made their way to the historic house where one of the finest orators to ever grace the House of Commons found tranquillity and retreat.

The royal couple were given a guided tour of the house and heard how O’Connell not only championed Catholic Emancipation but was also a driving force behind the movement to abolish slavery, inspiring such seminal figures in the abolitionist movement as Frederick Douglas.

Among those whom they met during their tour were a number of O’Connell’s great-great-great grandchildren including John Cunningham and his sister Emily Lenehan - Maurice O’Connell and his sister Susanna Davidson, and siblings Rickard and Danielle O’Connell.

“He was very relaxed and very nice,” said Mr Cunningham, “and he was very interested in the family and our young days in Derrynane. I told him how I learned to drive my father’s Consul on the beach in 1965 when I was a teenager and he thought that was great– I was very impressed with him.

“I think his visit is fantastic for the area and for south Kerry. When I was outside looking at his helicopter coming in, escorted by the two Air Corps helicopters, I found it very moving and it brought me back to the old days here and it’s more history to add to the history that’s already here.”

Ms Lenehan recalled as a child that Derrynane was somewhat of a “tumbledown place” until her grandfather donated it to the State and the OPW had done a marvellous job, restoring it and developing its beautiful gardens.

“I think Daniel O’Connell would have been delighted that Prince Charles would visit here. There is a family connection in that his brother, James, met Queen Victoria when she visited Killarney in 1861 but this was always a very open welcoming house and you still get that feeling today.”

Prince Charles and Camilla met a number of local groups, including Sea Synergy run by marine biologist Lucy Hunt. The group works with children to help highlight micro plastic pollution in the oceans as well as local underwater documentary maker Vincent Hyland who told them about local wildlife.

“My area of expertise is filming underwater and we talked a little about that but also about nature in terms of its biodiversity here in Derrynane and I showed them some footage of Atlantic octopus which they didn’t know you can find just offshore here and it seemed fascinating to both of them.”