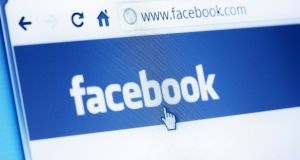 Undecided voters in the referendum on the Eighth Amendment were identified on social media for personalised targeting by overseas websites, a seminar on fake news has head.

Journalist and blogger Gavin Sheridan told the European Parliament’s seminar on “Fake News and the European Election” in Dublin that overseas social media had been used in the recent Irish referendum.

Mr Sheridan described one case in which an innocuous, almost drab Facebook page entitled “undecided on the 8th” appeared on close examination to be promoting a No vote.

He said the purpose of the page was not in itself to sway voters but to identify the undecided - those who clicked on it - for other far more strident websites which would then send personalised, targeted messages to the voter concerned.

The pernicious aspect of this was that voters did not know where the information was coming from, and who was sending it.

“There was zero visibility” and the question had to be “why the deception, why the lack of information”.

Facebook had subsequently made changes to what was allowable but Mr Sheridan said it was not the job of Facebook or its founder Mark Zuckerberg to protect referendum integrity. “That is the job of legislators here”.

Marjory Van Den Broeke, head of the spokesperson’s unit of the European Parliament, recalled the Daily Express had reported that “Penka”, a Bulgarian cow, “faced a death sentence because she wandered across the border to Serbia without paperwork”.

Ms Van Den Broeke said on u had to be aware of the subtext of such stories, that the EU was “mad” on crazy rules and was run by “fat cats wasting money and drinking Champagne”. The reality was a need to keep the EU farms free from disease like foot and mouth, she said.

Paddy Smyth, European editor of The Irish Times, said social media publishers were facing a public relations need to reform in the light of terrorism-related content, hate speech, child pornography and grooming. But he said they were making huge profits and “could do more”.

Mr Smyth said there was “a middle way” between “self-regulation” and “State censorship” on “greyer issues like the bulk of fake news”.

“Members of the public should have a forum that can consider whether the social media companies have effectively and speedily responded to their complaints - either about personal falsehoods - defamatory material, or fake news on the sites, or about decisions by overzealous social media companies to take down particular material”. He said this could be based on the model of the independent press council.

“This goes to a moral imperative - in a democratic society it is right that power should be held to account. Right to insist that social media companies use their privileged power to right wrongs,” he said.