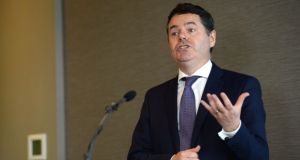 Almost €200 million will be paid out of State coffers after thousands of hospital consultants in Ireland settled a landmark court action, the Government said.

Minister for Finance Paschal Donohoe said the deal offered the “safest course of action for the taxpayer”.

Mr Donohoe said the settlement comprises €182 million in back pay and ongoing costs of €62 million per year from next January, with arrears to be paid from this month on.

Minister for Health Simon Harris said the deal would not have any effect on the funding of health services.

The taxpayer is liable for around 2,700 cases after doctors concluded their breach of contract case against the Health Service Executive (HSE), Mr Harris said. The arrears will be phased over 2019 and 2020.

Mr Harris said: “Significant savings for the taxpayer will be achieved given the terms of the settlement that has been brokered. It also saves all parties from a protracted and costly legal battle.”

The consultants took action after a decision by the then minister for health Mary Harney in April 2009 not to pay the final phase of increases provided under the terms of the 2008 Medical Consultants’ contract.

Outside court, Mr Harris said the original decision was based upon the dramatically reduced financial resources available to the State as the fiscal crisis was unfolding and the need to utilise diminishing resources to preserve health services to the greatest extent possible.

It preceded the introduction of pay reductions for all public servants (including medical consultants) from January 1st, 2010.

The 10 cases before the High Court were lead cases but were representative of some 700 similar cases in the system, with a potential further 2,000 cases with similar grounds for initiating proceedings.

Mr Donohoe said: “The settlement reflects the Government’s commitment to a comprehensive and vigorous defence against the claims and represents, on balance, the most cost-effective and least worst outcome for the Exchequer and the taxpayer.”

He added: “The settlement terms achieved, although extremely costly, represent a substantial reduction on early estimates of €700 million; it also reflects a considerable discount of 45+ per cent on the potential liability ultimately identified; excludes potential court interest which could arise if the matter was addressed in court; and minimises the State’s exposure to very significant legal costs for all potential claimants.”

The Irish Hospital Consultants Association said it was an important and essential development to ensure the delivery of high quality care to patients in the public health service.

The organisation’s president, Dr Tom Ryan, said it was a first significant step in restoring trust between consultants and health sector employers.

“However, it is now essential that the discrimination against new entrant consultants is ended without delay, as Ireland is no longer competitive in the global marketplace for talented doctors.

“With this in mind, the association awaits the publication of the Public Sector Pay Commission’s report in July in the expectation that it will address the competitiveness of the public health sector in Ireland.”