‘Is there anything to be said for setting the clocks forward to 2021,’ asks Colm Tobin 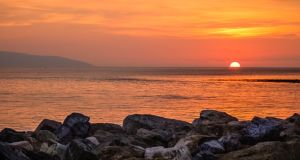 The sun setting in Galway Bay. The clocks go forward on Sunday morning, providing an additional hour to daylight in the evening. Photograph: Getty Images

Summer time officially begins on Sunday morning, when clocks should be put forward one hour .

The move to “daylight saving” as it is known, will commence at 1am on Sunday when clocks should be moved on to 2am.

Daylight saving time was introduced in Europe as a seasonal measure so that darkness falls later in the day according to the clock.

The change means that from Sunday Ireland will be five hours ahead of Eastern Time in the United States, but as Central European Time also moves forward, the one hour difference between Ireland and France, for example, remainis in place.

Portugal however, does not align with central European time, but remains the same time as Ireland and the UK in what is referred to as Western European Time.

The arrival of summertime in the midst of the coronavirus restrictions has caused a mild flutter of witty remarks on social media.

The writer and producer Colm Tobin tweeted: “Is there anything to be said for setting the clocks forward to 2021? It’s worth a shot imo”.

While some referred to an hour less in bed, one commentator, perhaps with an eye on the weather forecast said: “ Time change, great, prepare for an hour less rain”.

It may however be close to the end of clock changes, as the EU and national governments are considiering proposals to bring daylight saving time to an end.

The current proposal is for time changes to be abolished in 2021. It would then be up to EU member states to choose between winter or summer time zones – they can keep the current summer time system or scrap the twice-yearly clock changes.