On a sunny Thursday in Salthill’s near-empty promenade, the mood is quiet and terse 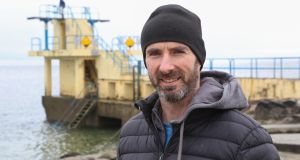 Michael Herron at Blackrock in Salthill, Galway. ‘You do feel the general anxiety. Personally, I feel I am dealing with it okay.’ Photograph: Joe O’Shaughnessy

For years, city planners fretted over how to solve Galway’s absurd traffic problem, one which sees cars and trucks grinding slowly through narrow streets, before heading out to Salthill.

Nobody thought of a pandemic. On Thursday, a day gorgeous and mild, no breeze and the sea green and glassy, the traffic that was about in Salthill skated freely on near-empty roads.

The mood by the seaside is strange: just that little bit too quiet and terse and everyone careful in how they move. The promenade has always been a four-seasons refuge for locals: a gulp of salt air, a quick swim for the hardy.

Michael Herron is one of those, not long out of the water. He sits sipping coffee and chatting to another Blackrock regular, who says the water is about seven degrees. They are on a stone-cut seat, several metres apart.

“You do feel the general anxiety,” Herron says. “Personally, I feel I am dealing with it okay. For a lot of people who haven’t had those challenges, it can be tricky to know what you are feeling is anxiety.”

He works as a physiotherapist. He stopped taking bookings the week before St Patrick’s Day, and closed up that week. He then called his landlord.

“I told him what I needed, which was the rent suspended. And he agreed.”

So far, the days have been okay. Last year, he attended a 10-day silent retreat.

“I think that has stood me in good stead for all of this,” he laughs. Nearby, two women chat as they walk in tandem, two metres apart. They prefer not to give their names but stop to talk. “This is the scariest thing I have experienced,” one says.

“Both of us are isolating. Keeping away from friends, family, supermarkets. Having our groceries delivered. As a precaution. If we go out, we are keeping the physical distance of six feet.

“We are happy with the way the Government is doing it. We think they are on it. They put in the precautions early on,” she goes on, adding that she sees her grandchildren when they come to visit and play in the garden.

But that’s it. She doesn’t go anywhere near them. It’s alien and counterintuitive, but absolutely vital. On their walks, they have noticed awareness increasing by the day.

People are staying away from each other, being strict about distance. The prom is a kind of self-contained community. Regulars know one another from years of tramping up and down.

“But this is stressful. Definitely, it is always on my mind.”

Some people say it is irresponsible to stay out and to be on the street and to play music. But I don’t feel that way

On Shop Street, the pubs are closed and the narrow street empty of its usual flaneurs and party animals. The atmosphere is weird and disconcerting, as though the eternal weekend has finally quit. Honza Kucera is busking anyway. It’s what he does. He has stationed himself in his usual spot near Murphy’s, his guitar case open. There’s too much velvet and not enough coin on show.

He’s originally from the Czech Republic. “The borders are closed but I reckon I could probably go back – if I had anywhere to go back to,” he says brightly.

Down the street, a lonely piper plays, the only other music on the street.

“It could be worse,” Kucera says. “There has been solidarity, you know. In the winter you hardly see anyone dropping coins because their hands are cold and everything. Now you see fewer people. But there are not so many buskers on the street. There is less competition and most people that you do see out, it is necessary for them to be out. But they are good.”

He’s living in a tent at the moment. He came back to the city last year, but could not get enough money for a deposit. When the rains and storms are severe, he uses hostels. But they have shut since the virus.

“The weather’s not so bad recently, anyway.” So he figures he might get out of the city for a while. “Go up the country. Roam the woods.” But for now, he might as well play music for the crowd not here. He checks the news bulletins “to see what else I shouldn’t be doing”. And he moves from busking straight back to his tent, resisting the temptation to call in on friends. “I am keeping the distance,” he shrugs. “Everyone is doing the same. I am not really scared, though. Some people say it is irresponsible to stay out and to be on the street and to play music. But I don’t feel that way, to be honest.”

On normal Thursdays, the heavy-duty gridlock on the fabled N17 would start just after the school bells rang across the city. Claregalway is one of those towns that featured prominently on the daily radio traffic reports, in the blissful yesterday when traffic was a huge problem. The town is ghostly quiet today. Jackie and Peadar Dolan are outside their cafe, Treat. They locked the doors almost two weeks ago but still call in to check the freezers and run an eye over things.

“Just keeping a business alive is a cost,” Peadar says. Treat is a local success story: a small, friendly, informal breakfast and dinner cafe opened on the cusp of the recession and slowly expanded to a second cafe in Lackagh village and a catering business. The company employs 60 people, and the Dolans could read the warning signs in the faces of their customers and their staff well before the Government issued instructions to close.

“We saw something coming and could feel it coming. People weren’t coming out. And then there was a sudden stop. And then my staff were becoming more fearful. And you took the decision that there wasn’t enough business to stay open and that you were putting yourself and the staff at risk.”

We have floods in Claregalway too. So fire, floods... famine is the only thing we haven’t had. And we have that now

They locked their doors on the Sunday before St Patrick’s Day. “Over this past two weeks, you couldn’t reflect because you were all over the place,” Peadar admits. “Your head is in a pure fog. It is only now we are starting to do that.”

They are deeply saddened by this and know they did the right thing.

“Getting it ourselves,” Peadar replies instantly when asked about his deepest fear in this whole crisis. They have read and heard enough to respect and fear it. So they will wait it out. The business has already survived several major hurdles.

Three years in, the cafe was destroyed by a fire.

“The local community really kicked in and helped us. We were in the midst of the recession and I think we worked for nothing for four years.”

Then the new motorway opened and instantly caused a 30 per cent drop in passing trade. The new VAT rates hit them. “And we have floods in Claregalway too. So fire, floods . . . famine is the only thing we haven’t had. And we pretty much have that at the minute. We survived all of those things because of the local people coming in. And that is what we miss. We miss the chat here and people coming in.”

Already, people have been asking Peadar about setting up the catering truck for takeaway coffees. He knows he could operate it within the rules, but is not sure that a demand exists.

There is, however, a need for something communal, some sense of gathering. “But would it be the right thing?” Jackie asks. Doing the right thing has become paramount.

Back in Salthill the swimmers come and go all afternoon. There’s plenty of space and the rocks and diving boards have never offered such a vital sense of escape.

“It will be interesting to see what happens when there is a bit of weather,” Michael Herron says. He and his friend cross their fingers, hoping that the promenade will stay open during the crisis.

Turning to his companion, he wonders about life after Covid-19. Will people be more wary? Will friends keep their distance? The older man laughs.

“I’m not sure about that. Sure who could do without a hug or a handshake?”