Gardaí, medics and Minister for Transport concerned at increase in road deaths

An Garda Síochána are carrying out a major policing operation nationwide to ensure people are complying with new coronavirus restrictions. At checkpoints, motorists are being questioned about the nature of their journeys. Video: Bryan O'Brien 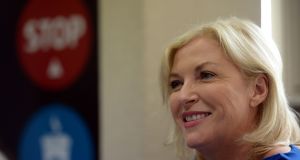 The country is facing a crucial period when hospitals needed to focus fully on the impending “surge” of patients infected with the Covid19 disease coming into hospitals, Liz O’Donnell said. Photograph: Eric Luke / The Irish Times

Ms O’Donnell said that there has been anecdotal evidence of high-risk, “irresponsible” behaviour such as speeding “ironically” due to lower levels of road congestion arising from the Government’s restrictions on public movement to prevent the spread of the virus.

The country is facing a crucial period when hospitals needed to focus fully on the impending “surge” of patients infected with the Covid19 disease coming into hospitals, she said, urging motorists to play their part to reduce the burden on accident and emergency departments.

“If there is a serious road crash, it is a huge burden on accident and emergency. What we don’t want is accidents and fatal road crashes coming on top of overburdened health workers and hospital wards,” she said.

“We are waiting for the surge so now, more than ever, people should be careful in everything we do, which should be to support the collective effort in the national emergency.”

Gardaí have spoken of motorists driving at higher speeds on emptier roads.

“We are seeing some outrageous speeds on the motorways. Traffic density is much lower but lower traffic density is associated with more fatalities as people tend to speed more,” said one senior garda.

“Whether these are individual incidents or part of a trend we can’t say yet.”

The RSA, the Garda and the Irish Association for Emergency Medicine have jointly expressed concern at the significant increase in the number of road deaths over the last two months

To date this year some 47 people have died on Irish roads, an increase of 24 per cent on the same period last year. Over the six days from March 17th to March 22nd, nine people were killed on Irish roads.

They have called on road users to act responsibly and safely. Concerns about the increase in road collisions have also been raised by healthcare professionals, worried about the additional pressure crashes will place on first responders and Emergency Department staff who need to focus on dealing with the Covid-19 pandemic.

Minister for Transport, Tourism and Sport Shane Ross said: “We cannot afford to put any more pressure on our hospitals and healthcare professionals at this time. Just as it is our national duty to tackle the pandemic, it is also our national duty to stay safe, keep others safe on the roads and not add to the workload of our health care system.”

“As someone on the frontline of the health service, I know that hospitals are about to be put under extreme pressure responding to Covid-19, the like of which has never been experienced before.

“If the current trends in road collisions continues it will place extra demands on our healthcare professionals. Every crash diverts ambulance crews and adds to the workload of already under pressure Emergency Departments. I’m asking people to have consideration for our emergency services by having greater respect for each other on the road. We all need to take responsibility for our actions when using the road.”

Assistant Garda Commissioner Dave Sheehan, Roads Policing Unit, said “An Garda Síochána has been building up its manpower and resources to respond to the unprecedented challenges posed by the Covid-19 health crisis.

“While I can assure you that the members of our Roads Policing Units nationwide will continue to enforce our life saving road safety laws, what we really need right now is for people to understand that every collision caused by irresponsible road behaviour distracts from the national effort to respond to Covid-19 related community needs.”

Ms O’Donnell stopped short of supporting a suggestion by oncologist Prof John Crown that there was a case to be made for lowering speed limits across the country during the emergency.

She said Prof Crown was correct in highlighting the need to take pressure off emergency departments with fewer road traffic incidents but felt that new legislation to lower speed limits would be protracted and the Government had to focus instead on other emergency laws.

“All of the focus of legislators and government should be on just looking after the health and social protection of our people and protecting business and people’s economic welfare,” she said.

“We have plenty of laws and plenty of speed limits. There is no shortage of road traffic laws; it is just that people aren’t complying with them and most people routinely speed.”

She noted that the restrictions on public movement meant “people are out of their routine” with roads being busier with pedestrians due to the number of people out of work and children out of school during the health crisis while at the same time lorries rush to deliver emergency services.

“Everyone needs to be careful and mindful that we are all in a emergency together,” she said.