Clifden firms struggle and thrive in wake of Covid-19 effect

‘It was like a ghost town. No one had ever seen anything like that ... people were very nervous’ 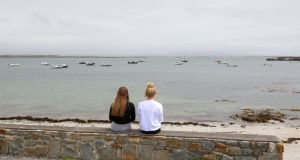 ‘The Irish are not sitting at home drinking water at night when they are on their holidays, and we are reaping the benefits of that.’ Photograph: Joe O’Shaughnessy

Local woman Joan King, has spent decades serving holiday makers at King’s Paper and Gift Shop in Clifden, but she has never experienced a summer quite like this one.

“We’ve had none of our foreign visitors. We would normally have huge numbers of Americans, Germans and French. It has killed the season for us and nothing will bring that back,” she says.

“Local people found it very hard when we went into lockdown. Clifden was like a ghost town. No one had ever seen anything like that before, people were very nervous. People are still nervous. A lot of people who had holiday homes came down and stayed. It was great for them to get out of Dublin and it worked well. Anyone [from Dublin] we’ve met has been lovely. There was a little negativity in the early days but it’s been fine.”

She runs the gift shop with her daughter, Lisa King, who also chairs the Connemara Chamber of Commerce, which was heavily involved as Clifden faced the challenges of reopening.

“Everyone had a different idea about how they wanted to deal with it. Some of the businesses were very forceful that they wanted masks worn in their shops at all times and others were more lax,” she says.

“We can’t afford someone on the door, we can’t turn people away because they are not wearing masks but some of the businesses wanted us to do that. So we’ve followed the guidelines that the Government put in place.”

Since then, they have faced those nervous about the virus and others who think it is a hoax, or exaggerated: “Sometimes we have to ask customers to step back, to give other people space. We have had several lectures in here from conspiracy theorists.”

Patricia O’Toole, who has operated a boutique and her Beautiful You fashion range in Clifden for the past eight years, believes the Government will have to do something drastic to help small businesses stay afloat.

Small retailers are arguing for more than a 2 per cent VAT cut.

“Shops like ours are part of the fabric of the town. We are part of what people do on their holiday. A massive injection of capital will have to be in the future for us,” says O’Toole.

“Until next March, it’s going to be very, very tough. We’re going to spend the winter paying out and with very little coming in. It’s a lot of pressure. Trying to put a brave face on it is very difficult. The health of the country is the key thing but on a day-to-day basis we have to survive. We need drastic measures to help us make it through. A second spike could put an end to a lot of us,” she says.

Some Clifden businesses are weathering the storm well, even thriving. Despite losing 12 staff members on the day the lockdown was announced, Kavanagh’s SuperValu has recorded its best summer season so far.

“Our staff were very afraid, it was all new and all scary. We had a few people with underlying health issues, a few couples who had children to look after at home and others with elderly relatives,” says store manager Joe Lynch.

A large influx of Irish tourists has more than compensated Kavanagh’s for the lack of foreign tourists in Clifden, with particularly strong off-licence trade.

“People’s habits have changed. Instead of shopping two or three times a week, they came just once a week and spent €200. It was like Christmas every day during March and April,” says Lynch.

“Our sales grew by about 20 per cent in March and April between home deliveries and because bars and restaurants were closed. For the past few weeks we have been busier than a normal year, even without the foreign tourists.

“Right now, Clifden is extremely busy. We’re not seeing nearly the amount of foreign visitors. The Irish are not sitting at home drinking water at night when they are on their holidays, and we are reaping the benefits of that.

The Abbeyglen Castle Hotel used to survive predominantly on north American and European visitors. This year, it is “100 per cent Irish”, says owner Brian Hughes.

“We’ve turned away far more business than we have accepted. We have had to rethink how we behave. Irish people need to be entertained all the time, they go to bed late, they all come down at 9.55am for breakfast, they like to keep the barman up all night. It’s been a huge cultural change for us,” he says.