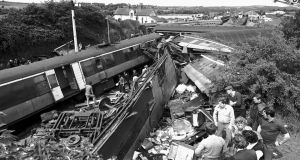 The aftermath of the Buttevant rail crash in August 1980. Photograph: Irish Examiner

Every day since the 10am Dublin to Cork train crashed in Buttevant 40 years ago on Saturday, a local parishioner has come to St Mary’s Church in the north Co Cork town to light a candle in a lantern for the 18 people who died that day.

“It’s such a gorgeous idea – to keep that light burning for 40 years to remember all those who died,” says Moyra Woodworth, who lost her then 36-year-old husband Bruce in the crash, and who has gotten to know many of the locals in the years since.

The lantern was donated by Austrian brothers Bernhardt and Wernfried Zeiner, to remember their parents, Albin and Maria Ann, who died in the crash, as well as all the others who lost their lives in Ireland’s worst rail incident of the 20th century.

On the day of the crash, train driver Bertie Walsh, from Glanmire in Co Cork, had brought the 378-ton Super Express, complete with 11 carriages and spare dining car, out of Heuston station at 10am. The train was packed with people heading south for the bank holiday weekend.

The journey passed uneventfully until just outside Buttevant at 12.40pm, when three danger signals suddenly shot up at the side of the track. Walsh immediately applied emergency brakes, and sounded the warning hooter.

But the train was doing roughly 113km/h and, at that speed, needed more than half a mile to stop. In the station ahead, CIÉ worker Willie Joe Condon saw the danger.

He frantically tried to free two wooden wedges or scotches jammed in the points on the main line. He freed one but was forced to jump from the path of the oncoming train before he could free the other.

The speeding locomotive left the main track when it reached the points and careered into a siding, colliding with a stationary ballast train. The wooden carriages behind the passenger train’s engine jackknifed and ricocheted across tracks.

Some people were killed instantly; others suffered terrible injuries and lived for a short time while trapped under the mangled mess of derailed carriages. Amazingly, some walked from the wreckage with relatively minor injuries.

Living in Rochestown in Cork city at the time, Ms Woodworth only learned her husband had died when she was called by her sister, Ann, who was working in the laboratories at the then Cork Regional Hospital.

Her sister called to tell her she was needed to identify her husband’s body, she remembers. “I turned to stone – Bruce had driven to work at Irish Industrial Gases in Little Island and was due to drive on to Wexford.

“The first train passed straight through, the second train was going to Tralee, which meant a change in Mallow. So he caught the third. That was the one that crashed,” she said.

While the Covid-19 pandemic curtailed plans to hold a major commemoration as took place in 2005 for the 25th anniversary of the incident, locals gathered, nevertheless, on Friday for a memorial Mass.

Terri O’Gorman, who helped organise the 25th anniversary and the special memorial that now stands at Buttevant station, said she hoped it helped the bereaved to know their loved ones are still remembered.

Eleven Irish people, including two Iarnród Éireann staff, died as a result of the incident, along with three English people, two Americans and two Austrians. Seventy people were injured, many of them surviving only due to an emergency operation that ferried them quickly to Mallow General Hospital and Cork Regional Hospital.

An inquiry into the incident published in May 1981 concluded the accident occurred after a set of points on the track were not connected to the signals and had not been set back after diverting a ballast train down a siding, leading to the passenger train derailing and crashing.

On Saturday, Ms Woodworth will mark the day itself when she and her daughter, Corinne, who was only three at the time of the incident, will visit her husband’s grave at St Michael’s Cemetery in Blackrock.

“Sometimes it seems like an eternity ago, or at least another life when you are talking about 40 years. But then on other occasions, something can trigger the memory and it’s like it was only yesterday and it’s all so raw and so real again,”she said.