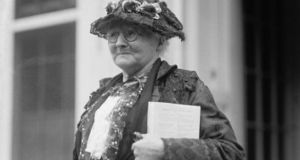 Born Mary Harris in Cork in 1837, Mother Jones immersed herself in the struggles of American miners earning herself the nickname “the most dangerous woman in America”.

Ties will be cemented this summer between an American group and a group set up in Cork to honour locally-born US labour activist, Mother Jones, when some earth from her grave in the US will be presented at a ceremony in Leeside during the Spirit of Mother Jones Festival.

James Nolan of the Cork Mother Jones Committee said that the group were delighted to have been contacted by American union member James Goltz recently to say that he has been given permission to bring some clay from Mother Jones’s grave to present to the people of Cork.

Born Mary Harris in Cork in 1837, Mother Jones emigrated first to Canada and then to the United States, where for over a 40 year period from 1871, she immersed herself in the struggles of American miners earning herself the nickname “the most dangerous woman in America”.

“Pray for the dead and fight like hell for the living,” became her slogan as she campaigned all over America for better conditions for workers. As part of her campaign for the abolition of child labour in 1903 she led a march to the home of then President, Theodore Roosevelt.

A formal ceremony is to take place on 11th July at the grave of Mother Jones in Mount Olive in the Miners Cemetery in Illinois at which a small sample of clay will be removed and permanently sealed and given to Mr Goltz for transporting to Ireland.

“This is a unique and historic act linking Mother Jones and her birthplace on the north side of Cork to her grave at Mount Olive after some 87 years. We wish to congratulate the friends of Mother Jones in Illinois for their thoughtfulness with their symbolic act of generosity and solidarity.

“We hope that, with the permission of Cork City Council, the sealed container can be placed permanently alongside the memorial plaque that we unveiled to Mother Jones on John Redmond Street in 2012 to mark the 175th anniversary of her birth in Shandon.

“The act is a further sign of the growing links and bonds which have been developing over the past six years between the friends of Mother Jones on both sides of the Atlantic, many of whom including James and his family have attended previous Spirit of Mother Jones festivals here in Cork.”

This year’s Spirit of Mother Jones Festival runs from August 1st to August 5thin Cork and among the speakers is environmentalist and Columban priest, Fr Sean McDonagh, who will speak on climate change and the world’s response to it.

Other speakers include local environmental activist and independent member of Cork County Council, Cllr Marcia D’Alton who will speak about the 15-year-long campaign by residents of the lower Cork Harbour area to oppose plans for an incinerator at Ringaskiddy.