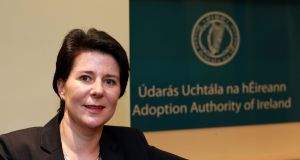 Patricia Carey, chief executive of the Adoption Authority of Ireland: the authority is hopeful the Bill will be passed soon. Photograph: Nick Bradshaw

There were 65 cases last year where birth mothers had to adopt their own children, new figures show.

Data from the Adoptions Authority of Ireland Annual Report 2016 show adoption orders were granted for 95 children during the year, with 65 orders involving step-families.

Under current legislation, if a woman whose partner is not the father of her child wants him to adopt the child, she must first give up her legal rights to the child and then adopt the child along with her partner.

The child’s birth certificate is replaced with an adoption certificate on which the natural mother is shown as the child’s adoptive mother.

The Adoption Authority, lone-parent organisations and legal practitioners had called for changes to the legislation to remove the anomaly and the Adoption (Amendment) Bill 2016 will remove the requirement, once it is passed.

The Bill will also remove the ban on the adoption of children of married couples who give their consent. And it will provide the High Court with revised criteria under which it can authorise adoption without parental consent.

This will mean children in foster care may be adopted if their parents have failed in their duty towards them for three years, when there is no reasonable prospect of parents caring for them, and when children have spent at least 18 months living with the applicant carers.

The Bill has been before the Oireachtas for more than a year.

Of the 95 domestic adoption orders last year, 24 of the children adopted were aged 17 and in only three cases, the child was under two years of age.

There were also 54 children adopted from abroad by Irish families in 2016, including from Vietnam, the US, China, Thailand, Bulgaria, Russia, Ethiopia and Lithuania. There were 72 declarations of suitability and eligibility granted. These are required before people can apply to adopt abroad and were granted to applicants wishing to adopt in Bulgaria, China, Haiti, India, the Philippines, Poland, Thailand, the US and Vietnam.

The authority also received 70 requests from adopted people who were seeking access to their birth certificates. Some 23 birth certificates were released and 15 requests were refused. Requests can take from eight months to two years to be processed.

The authority is required by law to contact the birth mother and ask for her permission to release the certificate. If she refuses, the document will not be released.

The Adoption (Information and Tracing) Bill 2016, which has been before the Oireachtas since late 2016, will give access to original birth certificates to all adopted persons. A mother will be entitled to make a legal objection to the access, but needs a “compelling reason” to do so.

Patricia Carey, chief executive of the authority, said it was hopeful the Adoption (Amendment) Bill would be passed soon.

“We look forward to its passing soon; it will open up adoption as an option for many children in long term foster care,” she said.

A Department of Children spokeswoman said amendments were made to the Bill in the Seanad, and so it must return to the Dáil. It will come before the Dáil on July 13th.