Affordable houses give hope to renters 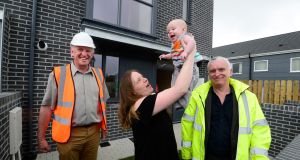 Helen Cheevers and her partner Sean Connell had been paying €1,700 a month to rent a house in Swords, north Dublin, which they and their two small children shared with two other adults.

For their new end-of-terrace, three-bedroom house in Ballymun costing €165,000, their mortgage payments will be €650 a month.

“We’d been looking to buy for more than a year, because a house share wasn’t really suitable when you have two children, but we were getting nowhere. Even though we are both in settled jobs, banks wouldn’t give us a mortgage that would get you anything anywhere near Dublin.”

The couple had been considering moving to neighbouring counties, and enduring long daily commutes to the city, when Helen spotted an advertisement for the co-op.

“I was looking on Daft.ie when I saw the advertisement and the price, and I thought ‘this has to be a joke’ – the houses were about half the price of anything else we’d seen. ”

She contacted Hugh Brennan, chief executive of the Ó Cualann co-op. “Hugh just said, ‘which one would you like?’ I couldn’t get over it.”

‘Bit of a fantasy’

From nearby St Margaret’s, Helen had resigned herself to not being able tobuy in her local area. “Looking at houses had just become a bit of a fantasy, and I did think we were going to be stuck renting. Now our mortgage is €650, with mortgage protection that comes to €700 – that’s a grand less a month than we were paying in rent.”

In addition to the price and location, the quality house attracted the couple. “We are delighted with this house because everything is new and modern and fitted and I love that there are solar panels and it’s energy-efficient because I’m big into energy saving myself.”

The houses, designed by Dún Laoghaire architects Smith and Kennedy, achieve some of the highest energy ratings on the market. In addition to solar panels, which will eventually allow the homeowners to sell energy to the national grid, the houses have heat recovery ventilation systems, and the highest insulation standards, making them “near zero” energy buildings, architect Joe Kennedy explains.

“These houses have an A2 energy rating – basically the same energy it takes to boil a kettle would allow you to heat the house.”