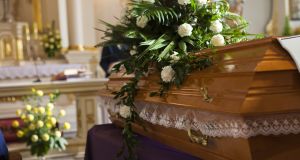 According to an undertaker, the practice of holding removals in churches has led to wedding rehearsals and practice for Holy Communion having to be cancelled. Photograph: Getty Images

Churches are not suitable places for wakes, a Catholic bishop has decreed in new guidelines designed to stop the growing practice of people being brought directly to the church for a vigil.

Bishop of Cloyne, Dr William Crean said that vigils for the deceased, which conclude with the closing of the coffin, should be conducted in a funeral home or the family home of the deceased person, but not in a church where the coffin must remain closed at all times

“The church, as the place where the Blessed Sacrament is reserved and where other services must take place, is not a suitable place for a wake,” said Bishop Crean in a new set of Guidelines for the Celebration of Funerals just published by the diocese which covers much of Cork county.

In introducing the guidelines Bishop Crean pointed out that “in a fast-changing culture some well intended by mistaken ‘novelties’ have crept into our practice of funeral celebrations” and the guidelines will help keep a focus on “the essential and most important elements of the funeral rites”.

A Diocese of Cloyne spokesman explained that the new guidelines were published in response to a number of queries that the diocese had received regarding the practice of re-opening coffins when a deceased person is brought directly to the church rather than lying in repose in a funeral home.

And he stressed that, when for pastoral reasons, a vigil for the deceased is allowed to take place in the church, the family of the deceased person should be asked to accept that “the coffin must remain closed at all times while in the church”.

According to one undertaker contacted by The Irish Times, there has been an increase in the number of funerals in some parishes where the body of the deceased is taken directly from the place of death to the church, rather than to their home or a funeral home for a wake.

“It’s been around for the last 20 years that the removal takes place in the church even though it was rare enough but over the past 12 months or so it’s becoming much more prevalent and it’s causing major disruption for priests but they don’t want to refuse families at a time of bereavement.”

According to the undertaker, who didn’t wish to be named, the practice has now evolved to the point where in some instances the church has replaced the funeral home as social outlet for people to catch up with relatives and others whom they may not have met for months if not years.

“And then the coffin started being turned around so that the remains are facing the public and then they started moving the top pews together so the family could be as one and I’ve heard of cases where pews are turned around to face the coffin in the centre.”

According to the undertaker, the practice of holding removals in churches has led to wedding rehearsals and practice for Holy Communion having to be cancelled while it also resulted in the church becoming more a place of conversation than a place of reverence.

“The priest has to be there to receive the deceased so he’s there from the start but then he has to stay around maybe for two hours while people sit in pews and chat because they don’t meet except at funerals or weddings so the church becomes a social place rather than a place of reverence.”

1 Coronavirus: Non-essential travel from US set to be banned within days
2 Covid-19 incidence in the Republic set to surpass that of UK
3 The MacCarthy family: Their father survived Dunkirk, Nagasaki and a torpedoed ship. Will their pub survive Covid-19?
4 Taoiseach tested twice for Covid-19 but excused quarantine after Brussels trip
5 ‘Our hearts are broken’ – implications of fresh lockdown sink in
Real news has value SUBSCRIBE