Labour leader says leadership on the issue is required 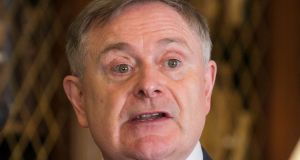 Brendan Howlin: It is not good enough . . . that the leader of political parties don’t give leadership. Photograph: Collins

There have been calls for Taoiseach Leo Varadkar and Fianna Fáil leader Micheál Martin to give their views on whether abortion should be allowed without restriction up to 12 weeks of pregnancy.

Ahead of the Dáil resuming on Tuesday afternoon after its Christmas break, Labour Party leader Brendan Howlin said Mr Varadkar and Mr Martin needed to show leadership on the issue.

Mr Howlin said they needed to say if they backed the proposals of the Oireachtas Committee on the Eighth Amendment. It recommended the Eighth Amendment be repealed and that legislation be introduced to allow for abortion up to 12 weeks. The Dáil is to debate its findings this week.

Mr Varadkar told the Fine Gael parliamentary party on Monday that the committee’s findings presented a “strong option” but did not express a personal opinion.

“This is not an issue that I regard as one that I want to score political points on. It is one that has divided this country for a very long time,” Mr Howlin said.

“This is not a simple issue for anybody. It is a complex issue for every society. That’s why I honestly believe we need leadership.

“It is not good enough that once the debate opens in Dáil Eireann that the leader of political parties don’t give leadership,” the Labour leader said.

Fianna Fáil health spokesman Billy Kelleher - who was on the Oireachtas committee and advocated allowing abortion up to 12 weeks - accused Mr Varadkar of causing confusion.

“Our Taoiseach has to show leadership and decisiveness on this issue, one way or the other. At this stage it is undermining the process.”

On the position of his own leader, Mr Martin, Mr Kelleher said the Taoiseach was the head of the Government and should provide clarity on the process the Government established itself

“Micheál Martin said that he would be making his views known on this,” Mr Kelleher said of his leader.