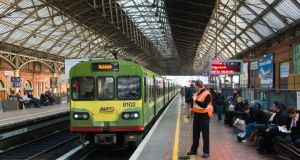 The roof at Dublin’s Pearse station dates from the 1880’s. A Dart train arrives at the station in November, 2008 Photograph: iStock

Irish Rail users have been advised of some changes to services this weekend as a result of upgrade works to the roof of Dublin’s Pearse Street station.

Tara Street and Pearse Street stations will be closed on Saturday and Sunday to facilitate the works.

Trains will not run between Connolly and Grand Canal Dock over the weekend.

As a result, Dart services will only operate between Howth and Malahide and Connolly, and between Grand Canal Dock and Greystones.

The Dublin to Rosslare Europort services will operate, but with bus transfers between Dublin Connolly and Bray stations.

All Northern Commuter and Maynooth Commuter services will operate to and from Connolly Station.

Pearse Station’s roof, which dates from the 1880s, is in poor condition and protective mesh netting has been in place in the station below roof level in recent years to protect customers and rail services, due to the corrosion which has occurred, Irish Rail said.

Its replacement has been identified by Iarnród Éireann as a crucial safety project.

While it is not a protected structure, the company believes the external appearance and character of the structure should be maintained.

Upgrade works, expected to cost €17 million and funded by the National Transport Authority, will take almost two years to complete.

“While the vast majority of works will not affect rail services and are also planned to take place at daytime to reduce impact on the surrounding areas, Iarnród Éireann does expect that the station will need to be closed for up to 13 weekends over the 23-month period for round-the-clock works, involving crane operations to install sections of the new structure,” it said.

Services will next face disruption on the 23rd and 24th of February.

A “crash deck” is to be installed to protect the station area during normal operations, and additional customer service staff will be on the platforms to manage crowds and provide accessibility assistance.