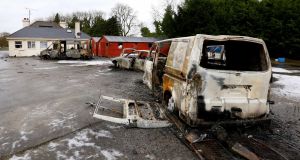 Burned-out vans and cars in the yard of the house in Strokestown in December. Photograph: Brian Farrell

A man arrested in connection with an attack on security guards occupying a house at the centre of an eviction controversy in Roscommon last month was charged in a no-notice court appearance on Friday. Gardaí feared unrest outside the courthouse if his appearance was flagged.

A major policing operation is planned for when the suspect appears back in court again next Friday. Gardaí believe it is highly likely anti-eviction protesters will gather outside the court, which may lead to a highly charged atmosphere or disorder.

The suspect was arrested in Co Mayo on Thursday in connection with the attack on a KBC bank eviction party on December 16th at the McGann family home in Falsk, Strokestown.

One particular piece of recently enhanced video footage has resulted in the identification by gardaí of four suspects.

Gardaí believe the four men they have identified were among a large group that arrived at the McGann family home on a cattle truck in the early hours of December 16th and were involved in the incident involving security men guarding the house.

Those security workers were the same men who had evicted the McGanns the previous Tuesday. They had stayed on at the house to ensure it remained in the possession of KBC.

The McGann family moved back into the house the next day as the Garda launched a criminal investigation into the attack on the security workers.

They were both questioned at Castlerea Garda station, and the man detained in Co Mayo has since been charged with burglary.

He appeared before Castlerea District Court on Friday morning and was remanded in custody to appear before Harristown District Court next Friday, January 18th, where a major security operation is expected to be mounted.

The McGann siblings were evicted from their home in Roscommon four weeks ago after a dispute between farmer Michael Anthony McGann and KBC bank over a loan in excess of €300,000.

The dispute has been before the courts since 2009, and in the second week in December an eviction party was sent to the property to evict the family.

Footage of the eviction was recorded on the phones of McGann family supporters who were present when the eviction took place.