Meningitis B: Parents call on Government to include all children in vaccine 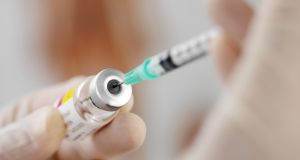 Thousands of parents have called on the Minister for Health to implement a catch-up vaccination programme for the meningitis B strain.

Parents have been urged by the HSE to check the vaccination records of their children after three people died from meningitis in the past three weeks.

A vaccination against meningitis B has been offered by the HSE to infants up to 12 months since October 2016. Children born before this have not have been immunised against the B strain but will have received the C vaccine. Parents have said the meningitis B vaccine costs around €150 privately per shot and 2-3 shots are generally required.

An online petition has been signed by 18,910 people, calling for Simon Harris to implement a catch-up vaccination programme for the meningitis B strain for “all children and teens” in light of the recent cases.

Eleven cases of meningococcal meningitis have been notified to the Health Protection Surveillance Centre since the last week of December.

The particular strain of meningitis diagnosed in these cases has not been disclosed. However, the department said no deaths had occurred that could be attributed to meningitis B among recent cases.

The Department of Health has said the National Immunisation Advisory Committee has not recommended a catch-up programme for children born before October 1st, 2016.

The majority of cases of meningitis B are seen in children less than one year of age, it said.

“The assessment of which vaccines should be included in the childhood immunisation programme and which age groups they should be allocated to is based upon the best medical evidence available, which is subject to ongoing review,” the Department added.

Labour’s health spokesman Alan Kelly said there needs to be “State intervention” to provide the meningitis B vaccine “at a more affordable price point for parents and their children”.

“Parents of young children are being asked to fork out up to €300 for meningitis B vaccines after what can be a financially stressful Christmas season. Many families, especially those who are less well off, are unable to afford to vaccinate their three year olds,” he said.

“Rather than lecture parents who are unable to afford this vaccine, the Government and HSE now have the opportunity to buy this vaccine in bulk to administer to children who would have missed out on this vaccine, and in turn this would significantly lower the costs.”

The Meningitis Research Foundation has said most parents are aware that children born before October 2016 were not vaccinated for the B strain but that “some will have forgotten”.

Diane McConnell, regional director of the foundation, said feedback from parents to its helpline is that they get “mixed up” about which vaccines their children have received.

“Parents need to make sure that you know your child’s vaccinations are up to date and what vaccinations they have,” she said.

She said the foundation was reminding people to check they are up to date with their vaccines and to know the symptoms of the disease.

Parents can contact the Meningitis Research Foundation helpline on 1800 413 344.