Call for ‘toxic’ relationship between meat industry and farmers to end 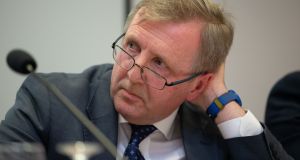 Minister for Agriculture Michael Creed: “This is an industry that is a global leader. We are better than most. We acknowledge that there is a need for change.” Photograph: Tom Honan

Minister for Agriculture Michael Creed is calling for an end to what he describes as the “toxic” relationship between the meat industry and producers.

Speaking at the official opening of Tullamore Show in Co Offaly, the Minister said the “current toxicity” would only see the industry “stumble from one crisis to another”.

Mr Creed said he “would certainly give consideration” to an independent investigation into profit margins in the beef industry, ahead of talks aimed at resolving a deepening row with farmers that has shut down many of the country’s main processing plants.

Beef farmers have been picketing outside meat factories over the prices they are getting for their animals.

“There are a number of initiatives at a European level about greater transparency in the food chain, and there is unfair trading practices legislation, which we are currently transposing from an EU directive into Irish law,” Mr Creed said.

“I don’t want to pre-empt anything that is discussed at the talks tomorrow, there’s a comprehensive agenda there. There’s all the stakeholders around the table and I await their outcome – if that’s one of the issues that they come up with we’ll certainly give consideration to it.”

Mr Creed called on Meat Industry Ireland (MII) to end the “current toxicity of relations” and said it could not continue. “It has been a difficult couple of weeks for the beef industry,” he added.

He hoped the talks that will commence on Monday under an independent chair would be fruitful.

Earlier, Fianna Fáil MEP Billy Kelleher said an investigation was necessary to determine “who is getting what”. He called for a completely independent evaluation: “It has to be transparent.”

The large processors “have a lot of sway in the market while farmers end up with little”, he said.

Treasurer of the Irish Farmers’ Association (IFA) Tim Cullinan said he had been calling for an independent investigation for more than a year.

Mr Cullinan expressed disappointment that the Minister would not be involved directly in the talks.

Threatened legal proceedings by the industry against protesters would also be suspended, he said.

‘Give us a break’

Meanwhile, Mr Creed defended the agricultural sector from criticism about its contribution to climate change.

The sector was under “relentless bombardment” about the sustainability of the industry, he said.

“Give us a break. We acknowledge that we have a role to play, but the relentless negativity towards the community is in danger of causing an adverse reaction.

“We can do more and we will do more. We are not looking for a free pass, we acknowledge that more needs to be done. We are doing our best. We deserve recognition for that.”

The Minister pointed out that Brexit was looming and he urged anyone currently trading with the UK to register with Revenue. The Department of Agriculture had a stand at the show offering assistance to anyone uncertain how to register. “We are ready to step in to support the industry.”

He added he hoped the UK would leave in an orderly fashion.