Cyclist collided with car near Shannon, bringing group crashing to the ground 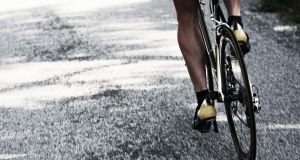 The cyclists had been travelling along the R458 which runs parallel to the N18 dual carriageway when the crash occurred. Photograph: iStock

Two cyclists were hospitalised, one with serious injuries, while four others were also hurt when at least one of them collided with a car during a cycling event in Co Clare on Sunday.

The collision occurred at about 11.30am at Firgrove, near Shannon.

The cyclists had been travelling along the R458, which runs parallel to the N18 dual carriageway, when the crash occurred.

It is understood that one cyclist and an oncoming vehicle collided and five others were then hit, bringing a group of cyclists crashing to the ground.

Road crews raised the alarm while the crew of a private ambulance that had been travelling with the event assessed and treated the injured.

The National Ambulance Service dispatched ambulances and a rapid response advanced paramedic unit. Three units of Clare county fire and rescue service from nearby Shannon town were also sent to the scene along with a number of Garda units.

One of those injured was transported to hospital by the private ambulance while a second was taken to University Hospital Limerick for treatment.

Four other cyclists were described as “walking wounded” and were treated at the scene for minor injuries.