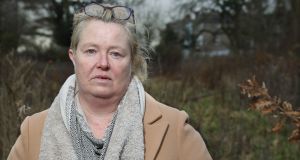 Catherine Coffey O’Brien who was a resident at the mother and baby home at Bessborough, Co Cork. Photograph: Garrett White

An adoptee born in Bessborough mother and baby home in Cork has called for a stay to be put on a planning application for apartments on the grounds until a full investigation is undertaken to see if any babies are buried on the site.

Mary Linehan Foley (54), the Mayor of Cork County and an independent member of Cork County Council, was born in Bessborough in 1966 to a 21-year-old woman. She was later adopted by a couple in Youghal.

Cllr Linehan Foley welcomed the publication of the Commission of Investigation into Mother and Baby Homes this week but said more needs to be done in relation to the issue of infant burials in Bessborough.

According to the commission report, 923 infants died in Bessborough between its opening in 1922 and its closure in 1998 but the commission has only been able to identify where 64 of these babies are buried.

The home was run by the Congregation of the Sacred Hearts of Jesus and Mary, and the commission said it “finds it very hard to believe that there is no one in that congregation who does not have some knowledge of the burial places of the children”.

Cllr Linehan Foley said she had successfully tabled a motion at Cork County Council requesting both Cork City Council and An Bord Pleanála to put a stay on a planning application for Bessborough until the site is fully investigated.

“We are aware that some babies were buried in unmarked graves. The least that they can do is stop everything until investigations are done and the Sacred Heart order should be helping the investigations and not standing back from it.

“I know [Minister for Children] Roderic O’Gorman has written to An Bord Pleanála asking the authority to take account of the commission’s report but it’s the order that should be helping with these investigations to give closure to these women.”

Another Bessborough campaigner, Catherine Coffey O’Brien (49), who ran away from the home while pregnant there as a 17 year-old in 1989, has also called for action on the issue. She said “we have a simple request” to Mr O’Gorman “and that’s that the graves where babies are buried there be marked, preserved and protected.

“We don’t want any big huge development overshadowing it. We have been overshadowed all our lives,” she added.

The Congregation of the Sacred Hearts of Jesus and Mary this week said it acknowledged that the issue of where so many of the babies were buried had “understandably become a matter of immense controversy”.

“We are distressed and saddened that it is so difficult to prove with legal certainty where many of these infants were buried especially with regard to Bessborough,” said the congregation in a statement.

Developer MWB Two Ltd, which has applied for planning permission for 246 apartments on a 3.7 acre site, said it was “conscious of the historical concerns and sensitivities... and have engaged experts in the areas of archaeological conservation and heritage in order to approach the development in the most sensitive manner possible”.

It said the experts’ report “concluded that there is no evidence to suggest that the proposed development site contains any undocumented burials associated with the former Mother & Baby Home”. The statement added that “as part of the planning process, MWB Two Ltd has committed to carrying out a full archaeological investigation on their 3.7 acre site”.

However, the commission pointed out in its report that a number of people and organisations had made suggestions about possible locations for children’s graves on the grounds of Bessborough.

These sites include locations within the Bessborough estate which is now reduced to approximately 60 acres as well as in areas in the 140 acres of the estate which have been sold by the congregation since the home closed.

The commission said its solicitor and an archaeologist walked the grounds in April 2019 with a local man who pointed to an area where he believed he saw a graveyard marked with white crosses and he swore an affidavit to that effect.

A similar exercise was conducted in October 2019 with a man who had played in the grounds as a child and he pointed out an area where he said he had seen open graves with the bodies of young children, and this was marked on a map.

However, the commission said that while it was clear there were a number of locations within the grounds where burials could have taken place, it found no surface evidence of systematic burial except in the congregation’s cemetery.

Family of woman who died from cervical cancer settles case 12:52
Covid-19 Vaccine Tracker: What's available in the Republic of Ireland and what else is coming? 11:57
Call for investigation into failure of Fermoy flood-relief scheme 11:44
Number of people in hospital with Covid-19 drops to 597 – the lowest total since New Year’s Day 10:56
Baarack the overgrown Australian sheep shorn of his 35kg fleece 09:57