Call for pre-recording of evidence given by rape survivors 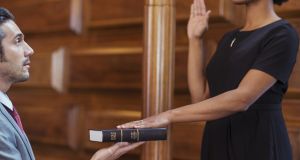 The Rape Crisis Network Ireland has called for evidence given by survivors of sexual violence to be pre-recorded. Photograph: Robert Daly/Getty Images

Evidence given in court by survivors of rape and sexual violence, including their cross-examinations, should be pre-recorded so that they no longer have to go through such “trial by ordeal”, the Rape Crisis Network Ireland (RCNI) has said.

In a submission to the United Nations in advance of Ireland’s appearance before the UN committee on the elimination of discrimination against women next month, the representative body also expresses concerns about cuts in State funding for rape crisis centres.

It says the goal of all evidence being pre-recorded would be in keeping with advances in reducing trauma within an adversarial justice system already tested in other similar systems. Pre-recorded cross-examinations for especially vulnerable witnesses has already been piloted in England and Wales. Special measures for vulnerable witnesses were also being examined in depth in Scotland and Northern Ireland, the RCNI says.

“Since Ireland last reported in 2005, we have experienced considerable economic upheaval,” the submission states.

Currently the waiting times for post-crisis assessment and response was “at least two months” and was up to 12 months in some centres.

RCNI encloses with its submission legal correspondence sent to the child and family agency Tusla in relation to how that agency collected sensitive data from rape crisis centres for a report on domestic and sexual violence published last October.

The advocacy group said that given survivors’ fundamental right to privacy and the fact that the majority of rape survivors did not choose to report to formal authorities, Tusla could only lawfully collect “the most basic high-level aggregate data and, at that, with extreme caution”.

“They have not to date recognised such limits to their powers.”

Among the recommendations in the RCNI submission are that the Central Statistics Office lead a collaboration on sexual and domestic violence statistics to be permanently included in the National Crime and Victimisation Survey, which takes place every three to four years.

It also recommends that the Government prioritise and resource data protection capacity and infrastructure for all those engaged in collection of statistics on rape and sexual violence “as a matter of urgency”.

Ireland was last examined on compliance with the Convention on the Elimination of Discrimination Against Women (Cedaw) in 2005.

Government representatives will appear before the Geneva-based UN Cedaw committee from February 13th-15th.