Protest at Department of Education over ‘inaction’ on UL misconduct claims 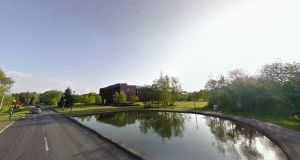 Protesters say they occupied the Department of Education head office in Dublin to highlight “inaction” regarding allegations of misconduct at University of Limerick (above). File photograph: Google Street View

A group of protesters occupied the Department of Education head office in Dublin on Monday to highlight “inaction” regarding allegations of misconduct at University of Limerick.

The protest ended on Monday evening after the group said they were promised a meeting within weeks with the Minister for Education Richard Bruton.

The five individuals, who include at three people who worked in the college’s finance department, said they were seeking an independent investigation into concerns over irregular expenses claims and human resources issues.

Earlier, one of the group, Leona O’Callaghan, said those involved in flagging concerns had felt “ignored and dismissed” by the department.

“We’re calling on the Minister to establish a wider investigation into these issues. The Higher Education Authority also wants one. UL is resisting this. Now, the ball is in the Minister’s court,” said Ms O’Callaghan.

She said she left her job became unsustainable when she challenged expenses in the university.

Internal correspondence obtained by The Irish Times earlier this year showed the Higher Education Authority sought an independent inquiry into more than a dozen allegations of misconduct at the college.

The allegations broadly relate to treatment of staff or former employees who raised concerns over alleged financial irregularities or human resources practices.

“It is our firm conclusion that the university is suffering considerable reputational damage and will continue to do so while these allegations remain unresolved,” the authority’s then chief executive Tom Boland wrote.

Mr Justice Murray said the authority had not passed on details of the bulk of the allegations.

Of the remaining six allegations, he said four had been dealt with and two were connected to a pending disciplinary process that had been delayed on foot of an earlier inquiry at the behest of the HEA.

Mr Justice Murray said the university had “robust and fair” processes for dealing with complaints and disciplinary matters.

It had also strengthened these processes following an independent review of three of the allegations, known as the Mazars report.

This report, published last year, confirmed that some staff at UL filed irregular claims including mileage payments for trips between home and the college.

However, it found all inappropriate claims were challenged and, ultimately, none of these payments were issued.

The report prompted the Higher Education Authority to express concern over a “culture of inappropriate” expense claims at the university.