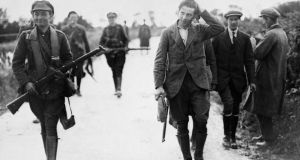 A prisoner under escort at the South Western Front during the Irish Civil War. Photograph: National Library of Ireland

A memorial to all those who died in the Civil War is under consideration by the group set up to advise the Government on commemorations.

Between 1,500 and 2,000 people - the exact figure has never been determined - died in the short, but vicious Civil War between June 1922 and May 1923 which followed the signing of the Anglo-Irish Treaty.

Despite its seminal importance in the history of the State, there is no national memorial to commemorate the war.

Dr Maurice Manning, the chair of the Government’s expert advisory group on commemorations, said the group have discussed a permanent memorial.

Dr Manning said the most obvious option is to rededicate the cenotaph on the lawn of Leinster House to all the victims of the Civil War. It is currently dedicated to the memory of Arthur Griffth, Michael Collins and Kevin O’Higgins, three of the most prominent pro-Treaty politicians.

However, the memorial is within the grounds of Leinster House and is not open to the public.

Dr Manning said the group is open to consideration for a public memorial either there or in a different place.

“I’m keen that there be a public debate on this. What form should the memorial take? We should have a debate if the Leinster Lawn is suitable or some other place. I think it is much more practical to think anew,” he suggested.

“Is it a good idea to commission a permanent memorial to all those who died in the Civil War. The idea of a day of reconciliation is a good idea, but how do you structure it?”

Dr Manning said now is the right time to commemorate the Civil War as the bitterness had dissipated over the last almost 100 years.

In its guidance to the Government on the second half of the decade of centenarries, the advisory group recommended the State should take a “reflective and reconciliatory tone” in relation to the Civil War that recognises “neither side had the monopoly of either atrocity or virtue and this was true of words as well as actions.”

It said the silences that followed the Civil War could now be replaced by “meaningful engagements with a difficult and traumatic time”.

It went on to state the consequences of the actions on all sides, and the depth, sincerity, or sometimes anger and sense of retribution underpinning those actions, needs to be confronted as part of any meaningful commemoration.”