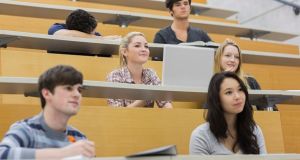 On paper, it is a golden opportunity for the State’s universities. The Republic’s soon to materialise status as the biggest English-speaking member of the European Union could result in a surge in students and world-class academics seeking an Irish home.

It could also open the door to eye-watering amounts of EU research funding. However, whether or not the system could cope with such an influx is another story. Following a decade of austerity-era cuts, much of the State’s higher education system is on the cusp of crisis leading senior academics to question State’s capacity to seize the opportunities presented by Brexit.

It is little surprise, then, that our top universities – Trinity College Dublin and University College Dublin – have been sliding down international rankings, prompting much soul-searching. On top of this, the State’s high birth rate means that local pressure for spaces will mount over the coming years. Enrolment is due to climb by almost 30 per cent by the end of the next decade.

Philip Nolan, president of Maynooth University, one of the country’s fastest-growing universities, says the situation is not sustainable.

“The Irish universities are, in general, falling rapidly in world rankings as the impact of a decade of austerity and under-funding shows in our worsening staff-student ratio and a greatly reduced capacity to conduct world-class research,” he says.

Long-standing plans for sustainable university funding are stuck in a political quagmire.

“Whether this is a success or a failure all depends on what we do with funding higher education in the short- to medium-term,” says Tom Boland, who recently stepped down as head of the Higher Education Authority (HEA).

“We’re constantly saying there is a crisis,” he says. “But this could be an opportunity if we fund it properly, enhance the quality of what we have, and Ireland becomes an increasingly attractive place to study.”

One of the biggest challenges will involve navigating obstacles linked to the Border.

Even before the inception of the EU, there has been a tradition of students moving between the UK and the Republic, as well as extensive academic networking, collaboration and research activity.

These issues are most acute for colleges closest to the Border, such as the institutes of technology in Letterkenny and Dundalk which are heavily reliant on students from the North. “This is a real concern,” says one senior academic from the South: “If UK students are treated as international students, will they come here anymore?”

Given that an estimated 15 per cent of the UK’s top researchers are non-UK nationals, policymakers hope the Republic will become an attractive location for hundreds of world-class academics seeking a new home.

The Irish Research Council – which funds third-level research – was quick to try to seize the opportunity, placing a two-page ad in the London-based Times Higher Education to highlight Ireland’s offerings to a potentially disaffected UK-based talent pool.

Niall FitzGerald, who chairs Leverhulme Trust, one of the largest funders of UK academic research, believes Irish universities have a once-in-a-generation chance to become a global hub for research.

“I meet deeply worried vice-chancellors every day. They face an existential crisis,” he told business leaders at a Dublin event recently. “Already, some of the world’s foremost researchers are seeking a new base within the EU, facing loss of their lead role on key research programmes or outright exclusion from pan-European research consortia.”

Andrew Deeks, president of UCD, agrees, saying that having “a disaffected talent pool right on our doorstep” is an opportunity of which Ireland’s competitors can only dream.

Informal contacts have already taken place between senior university figures from the Republic and the UK over the potential for joint academic appointments or new partnerships which might enable UK institutions to continue accessing EU-funded research programmes.

Some have even discussed the possibility of establishing a presence in Ireland or other EU states to keep the door open to European collaboration.

“The lack of certainty as to what form Brexit will take has meant that efforts to respond at present are largely speculative,” a spokesman said.

Yet there is no escaping the elephant in the room: funding for Ireland’s higher education has been dwindling and, given the fragile make-up of the Government, there is little appetite for controversial measures such as a student loan scheme,

Nolan sees these issues playing out every day at Maynooth. His university is in the Dublin commuter belt, the fastest-growing region. Numbers have jumped from just under 9,000 in 2008 to more than 11,000 this year. They should rise by a further 3,000-4,000 in coming years:

“We’re about to run out of space,” he says. “We can’t increase places in our science programmes to meet demand. Our labs are at capacity. We’re teaching students in overcrowded lecture theatres.”

The university’s global ranking place has been safeguarded thanks to “hard work and dedication,” he says. But he is worried it will not last for long.

“The funding system is simply not fit for purpose,” says the group’s chairman, Peter Cassells, in the foreword. “It fails to recognise the current pressures facing higher education institutions or the scale of the coming demographic changes. These pressures are now seriously threatening quality.”

However, a surge in State funding is unlikely, while student loans are controversial and politically unpopular. Minister for Education Richard Bruton says a consensus is required. None seems likely any time soon.

Ireland’s universities cannot wait much longer, says Nolan: “This inaction threatens the very future of our university system,” he says. “The Irish university system is, right now, world class, but it won’t be for long.”