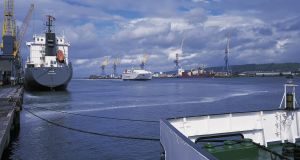 The posts would be at Belfast Port (above), Larne and Warrenpoint and would be designed to accommodate additional customs officers and vets, who would be dealing with livestock

Unionist politicians have responded with annoyance and dismay after a junior Sinn Féin Minister told a Stormont committee that there will be new physical border posts at Northern Ireland ports.

An “Irish Sea border is now a certainty”, the Ulster Unionist Party leader Steve Aiken said on Thursday following comments by Sinn Féin Minister Declan Kearney that border posts are to be created to deal with trade coming into Northern Ireland from Britain.

Mr Kearney told the Assembly’s Executive Office scrutiny committee that the “British government has confirmed it will urgently put in place detailed plans with the Executive, which does include the physical posts at ports of entry”.

Mr Kearney informed former Sinn Féin MEP Martina Anderson that the British government had signalled that “delivery on that infrastructure needs to start as soon as possible”.

“The British government has indicated that it will provide advice on the requirements and the funding to put that in place.”

Ms Anderson, in her questioning of Mr Kearney on Wednesday, indicated the posts would be at Belfast, Larne and Warrenpoint and would be designed to accommodate additional customs officers and vets, who would be dealing with livestock.

While it appeared implicit in the EU-UK deal that allowed for Brexit to proceed that there would be checks on some goods and livestock coming in from Britain, unionist politicians have campaigned against any such border at Northern Ireland ports.

He said his party had warned “this was sadly inevitable” if the British government continued with the deal it struck with the European Union.

“It is unforgivable that we have ended up here,” said Mr Aiken. “For all the big talk and bluster, Northern Ireland will now have to deal with border control posts at our ports and airports.

“This places a huge burden on businesses here who will be expected to be totally prepared for the changes in just over seven months time, amidst the crisis many are currently facing due to Covid-19,” he added.

A British government spokesperson said it had “always been clear that there will be requirements for live animals and agri-food, building on what already happens at ports like Larne and Belfast”.

“We want to work with Northern Ireland businesses and the Executive to ensure new administrative procedures are streamlined and efficient,” the spokesperson added.

The SDLP Brexit spokeswoman Claire Hanna said that checks at Northern Ireland ports should come as no surprise as it was clear for a long time that this must happen. “This is an inevitable consequence of Brexit,” she said.

Ms Hanna said the proposals gave “a little bit of comfort” that if there were checks at Northern Ireland ports that North-South trade could happen seamlessly.

She said that the proposals contradicted previous British government commitments about there being “unfettered” trade across the Irish Sea after Brexit.

“The only way to minimise the checks in the Irish Sea is to soften Brexit overall,” added Ms Hanna.

1 Irish tourists excluded from visiting Greece and Croatia
2 Taoiseach has confirmed schools will reopen at the end of August
3 Derek Chauvin charged with murder in connection with death of George Floyd
4 Quarantine will cease within fortnight, Ryanair CEO claims
5 Garda to scale down Covid-19 enforcement for June bank holiday
Real news has value SUBSCRIBE