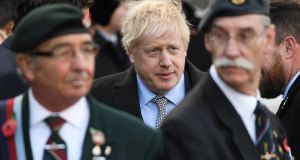 There was a sceptical and critical response to British prime minister Boris Johnson’s pledge to amend the law to protect former British soldiers from “vexatious” legal actions, including those relating to killings of the Troubles.

Under the proposals a British Conservative government, if returned, would amend the Human Rights Act in the UK so it does not apply to issues – including deaths during the Troubles – which took place before it came into force in 2000.

“If I’m elected on the 12th December, I want the message from my government to our armed forces to be louder and clearer than ever: we salute you and we will always support you,” said Mr Johnson.

The Minister for Foreign Affairs Simon Coveney was critical of the proposal while the implicit and sometimes explicit response from nationalist, unionist and victims’ groups was that this was a cynical electoral ploy by Mr Johnson and the Tories.

And while supporters of an effective amnesty for British army veterans facing prosecution for Troubles killings and other offences complain of a prosecutorial bias against former soldiers, the North’s Public Prosecution Service (PPS) produced figures which effectively challenged that view.

The PPS said in relation to legacy prosecutorial decisions it had taken since 2011, 17 related to republican paramilitaries, eight to loyalists and five to the British army.

Mr Coveney in a tweet said, “There is no statute of limitations, no amnesty for anyone who committed crimes in Northern Ireland. The law must apply to all, without exception, to achieve reconciliation.”

Speaking to journalists in Brussels on the fringes of a foreign ministers’ meeting, Mr Coveney said he was “worried” by the talk of an amnesty. He added that the proposals were not “ consistent with what is in the Stormont House Agreement which I think should be setting the parameters for the way forward because that is the basis on which everyone expects us to move forward.”

He said the proposals may just be part of an election campaign, though they had yet to appear in manifestos, but there is already in the Stormont House Agreement “an agreement between both governments and the parties in Northern Ireland about how to progress to manage very sensitive legacy issues and to move a process of reconciliation forward.”

It does not contain provisions for “amnesties for any one sector within Northern Ireland or people who were involved in breaches of the law during the Troubles. I think it is important that a process of reconciliation and legacy move ahead in a way that is consistent with what has been agreed.”

He said he was not aware of any prior consultations with the Government ahead of the announcement.

The DUP leader Arlene Foster said while her party opposed vexatious cases against veterans “we cannot have a situation where anybody who has committed a heinous crime is actually just swept aside in an effective amnesty”.

“We will not support that in parliament,” she said.

UUP Assembly member Doug Beattie, himself a decorated former British army officer, said, “many people will question the sincerity behind the government’s indication that it will ‘consider’ legislation to protect military veterans from prosecutions”.

He feared it was a “ploy” to win votes from the British armed forces and from veterans. He said, “If such legislation were to be used to prevent former soldiers from being prosecuted, it could lead to case law that would inevitably be seized upon by those who would seek to apply it equally to terrorist suspects, and thereby lead to a de facto amnesty for terrorists.”

Sinn Féin leader Mary Lou McDonald said the proposal was “Tory kite-flying”, while adding, “Those families who wish to pursue justice should face no impediment, that the truth must out, that the British state record here of mayhem and violence and state collusion, that that story will be told even as that same establishment tries to frustrate the efforts of families – many of whom for half a century have sought simply the truth.”

The SDLP leader Colum Eastwood said the Conservative government was “obsessed with the idea of granting amnesty to soldiers who committed grievous wrongs and heinous crimes during conflict in Northern Ireland”.

“These reports further underline the need for MPs from Northern Ireland who will turn up to Westminster to face these proposals down,” he said.

Mark Thompson, of Relatives for Justice, said Mr Johnson and the Conservatives were engaging in pre-election “rhetoric, misinformation and a bit of propaganda” and that if there were an amnesty for one group there would be an amnesty for all.

He added, “They have promised they are going to protect soldiers when in reality they know legally they are not in a position to do it. The only position they are in is to pass through parliament a general amnesty for all combatants, and that provides an even bigger headache for them.”