Report into Olympic ticket touting scandal to be given to Minister 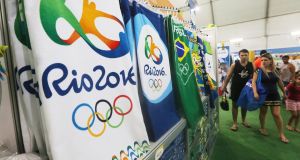 The report investigated ticket distribution adopted by the Olympic Council of Ireland from the London 2012 to the 2016 games in Rio, Brazil. Photograph: Mario Tama/Getty Images

A report into the Olympic ticket touting scandal is to be delivered to Minister for Transport Shane Ross this Friday.

The examination by former High Court judge Carroll Moran was to be completed by May 19th.

However, Mr Moran sought a further extension due to a delay in responses from the key personnel involved. The report was sent to certain parties on March 31st and offered three weeks to respond. It is understood significant time was required by the judge to consider the responses.

Government sources said they were reluctant to offer any further extensions but were eager the final report be “bullet-proof”.

It is expected Mr Ross will bring the final report to Cabinet the week after he receives it.

Mr Moran was asked by the Government to examine the “policies, procedure, processes, and practices” of ticket distribution adopted by the Olympic Council of Ireland from the London 2012 to the 2016 games in Rio.

It began on September 19th, has still to be published due to ongoing “time issues”. An extended deadline of March 31st was set.