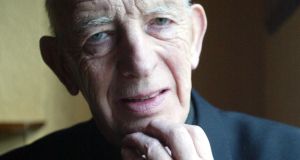 Fr Alec Reid, who died in 2013, went to see Gerry Adams in 1986 and asked: ‘what can you do to stop the IRA?’ Photograph: Gareth Chaney/ Collins 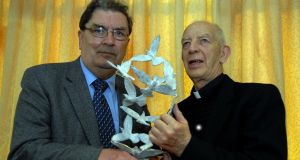 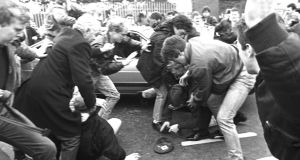 Two British Army corporals stray into an IRA funeral of Kevin Brady in Andersonstown. The two men were viciously beaten by the mob before being shot dead on waste ground close to Casement Park. 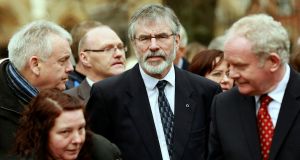 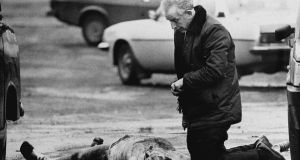 ‘One of them seemed to be breathing’: Fr Alec Reid gives last rites to a soldier killed in west Belfast in 1988

The late Fr Alec Reid, who was pivotal to the beginnings of the Northern Ireland peace process, recalled how it all began following a conversation with Gerry Adams in 1986.

A message he later conveyed to John Hume was smeared with the blood of a dying British soldier he anointed during one of the Gibraltar Three funerals in 1988.

He also remembered how his own health collapsed following a final meeting with hunger striker Bobby Sands and how, during a subsequent break in Rome, he was an eye witness to the 1981 assassination attempt on Pope John Paul.

The incidents are recalled in a new book One Man, One God by fellow Redemptorish priest Fr Martin McKeever which was launched at the Clonard monastery in Belfast on Tuesday by former president Mary McAleese. Fr Reid, from Nenagh in Co Tipperary, spent 40 years based at Clonard in Belfast. He died in Dublin in 2013. Fr Reid’s recollections in the book are based on recorded interviews conducted with another Redemptorist priest, Fr Michael Kelleher.

His role in the peace process began with prison visits in the mid-1970s when he and Belfast priest Fr Des Wilson became involved as mediators between rival Republican factions. It was when he had first contact with Gerry Adams.

Later Fr Reid tried to stop the 1981 hunger strikes and recalled his last encounter with Bobby Sands who went into shock as they spoke. “We were talking for about an hour and an half and for the last half hour he was going like that (shaking), and I said I’m putting too much pressure on this man... I had better stop. Now I regret I did.”

Later, as Fr Reid waited to be taken from Long Kesh where the prisoners were held, “I got the feeling... I felt sick and I never had been sick... two or three days afterwards I conked out and I was taken to hospital... And that was the end... the hunger strike went on and I was out”. Among his visitors in hospital was Adams.

Bobby Sands died on May 5th 1981, as did nine other men between May and August that year.

After his collapse Fr Reid was sent to Rome by his religious superiors. He was in St Peter’s Square on May 13th that year when the assassination attempt was made on Pope John Paul. The pope “had just passed me and there was a bang that turned out to be a shot... and all the pigeons up in the Bernini colonnade there, they all started to fly all over the place.”

He turned “and there was this fellow, foreign-looking, about, I’d say, in his late 20s or early 30s, and he was jumping up and down and waving his hands in the air, kind of shouting hallelujah’. The next thing one of the Swiss Guard jumped at top speed over the barrier and I was the last one at the barrier because at the shot everybody had run.”

Back in Belfast in October 1981 he was approached by an IRA man about UDA soldier Tommy Cochrane who had been kidnapped. The IRA man said he had authority to spare the UDA man’s life but it meant travelling to South Armagh and he did not want to go alone. Fr Reid agreed to go with him but by the time they got there it was too late, Tommy Cochrane had been killed.

Time passed. It was while he attending a wake in the Clonard area of Belfast some years later it hit him that something had to be done. The wake was for a young man shot dead by loyalists. Seeing the grief of the young man’s widow he said to himself “something’s got to be done about this”. He felt he had to. “Our first objective was to stop our own people killing, that was the IRA,” he said.

‘There is only one way’

As Fr Reid understood it “in other words, he [Gerry Adams] said ‘a strategy that involved Sinn Féin, the SDLP, and the Irish government’”.

Fr Reid decided to contact the SDLP but attempts to do so through deputy leader Seamus Mallon “proved frustrating and ultimately unsuccessful”. On May 19th, 1986, he wrote a long letter to party leader John Hume, who responded “almost immediately” declaring “his willingness to cooperate, despite the obvious political risks involved”.

Fr Reid became a conduit between Sinn Féin and Hume. In the midst of this the priest inadvertently came to worldwide attention.

It was March 1988. Earlier that month three IRA members – Seán Savage, Daniel McCann and Mairéad Farrell – were killed by SAS forces in Gibraltar. A further three people were killed at their funeral in a gun and grenade attack by UDA member Michael Stone.

One of those latter three victims was Kevin Brady. The morning of his funeral, March 19th, 1988, Fr Reid collected correspondence from Sinn Féin in Belfast to bring to Hume in Derry. As the funeral cortege passed he saw Kevin Brady’s mother walking behind the coffin and was going towards her “when this car suddenly backed at speed, but it got stuck”.

Shot in the air

It was stopped by black taxis acting as a guard of honour at the funeral as Brady was “a black taxi man”. One of the men in the trapped car “stood up and fired a shot in the air”. Somebody got a wheelbrace “and smashed the windscreen of the car”.

Fr Reid went to investigate. He found “two rugby scrums and each rugby scrum had one of the people in the car... they weren’t kicking them or anything.” The two men in the car were pushed into nearby Casement Park and put on the ground, face downwards. Fr Reid got down between them, put a hand on each and called for an ambulance.

Someone searched one of the men’s pockets and “pulled out some sort of identity... and said ‘He’s a fucking Brit’ and he started to kick him in the head.” Someone came behind Fr Reid and said to him “get up or I’ll f***ing-well shoot you as well”. Next thing the priest realised was that the two captured British soldiers were being hauled over the Casement Park wall to a black taxi.

Blood on the envelope

He decided to follow in his car. “I had the key in the door of [my] car, when I heard two shots.” He went to where the soldiers were “and one of them seemed to be breathing and he was lying on his back and I knelt down and started giving him the kiss of life”.

Someone touched the priest and said “Father, that man is dead.”