Have you seen this rare European butterfly in Ireland? 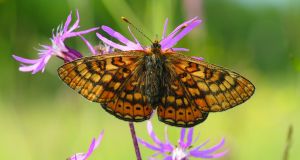 A rare European butterfly has been found in a bog in West Offaly and Bord na Móna has asked people to be on the lookout for more of them.

The Marsh Fritillary Butterfly is one of the rarest butterflies in Europe and was last seen on Turraun Bog in 1995.

It has been recorded back on the bog within the past week, Bord na Móna ecologists have confirmed.

The Head of Bord na Móna’s Ecology Department, Joe Lane, said “This is a discovery of big European significance, the Marsh Fritillary Butterfly is a rare and beautiful creature that we thought had disappeared but now we now know to have returned.

“We believe it has returned because of the extensive bog rehabilitation work that has taken place in Turraun and at the nearby Lough Boora Discovery Park but we need way more data on this project. That is why we are making a big appeal to people to go out there and find more examples of this and other butterflies.”

He said they wanted people to photograph the butterflies and send pictures to ecology@bnm.ie.

The Marsh Fritillary is the only Irish butterfly that is protected at a European level. It is a species that will live in wetlands and bog margins.