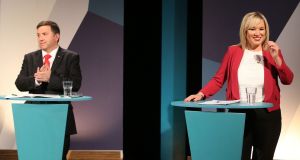 The row over loyalist paramilitary support for unionist candidates prompted a number of clashes when senior politicians from the five main parties engaged in debate on the Westminster election on the BBC on Tuesday night.

On Monday a group which has the support of three loyalist paramilitary organisations - the UVF, Red Hand Commando and the UDA - urged unionists not to vote for Alliance candidates in Thursday’s election.

The Loyalist Communities Council (LCC) also called on unionists to support named DUP and Ulster Unionist Party candidates in four marginal seats while warning that a vote for Alliance is “driving a nail into the coffin of the union”.

Issues such as Brexit, a Border poll and the terrorist attacks in London and Manchester featured during the debate, as they did the previous night in the UTV leaders’ debate. But it was the issue of loyalist support for unionist candidates that sparked some of the sharpest exchanges when the BBC debate was held in front of a studio audience on Monday night.

Mr O’Dowd accused the DUP of using the UDA to advance its election prospects. Mr Donaldson responded that his party “opposes anybody who supports paramilitarism”.

But he said the DUP wanted “to work with those who want the paramilitaries to leave the stage and we will continue to do that”.

With Mr O’Dowd continuing to challenge Mr Donaldson on the issue of UDA support the DUP Lagan Valley candidate then attempted to undermine his argument by producing a photograph showing the UDA’s south Belfast “brigadier” Jackie McDonald in the company of Sinn Féin’s South Belfast candidate Mairtin O Muilleoir.

He followed up by stating that the IRA Shankill bomber Sean Kelly “who was responsible for the murder or nine innocent people on the Shankill Road is out campaigning for Sinn Féin in this election”.

Mr O’Dowd replied, “The DUP use the UDA for elections, the UDA use the DUP in government.”

SDLP leader Mr Eastwood, as he did during the UTV debate on Monday night, accused Sinn Féin of reneging on its responsibilities by its refusal to sit in the House of Commons.

On the possibility of a Border poll Mr Eastwood said there was nothing wrong with having a constitutional position on unity but if there was going to be a debate “let’s have it in a democratic and peaceful way”.

Mr O’Dowd said the constitutional issue was important but that Sinn Féin didn’t “want to see two failed states joined together”, that it had a “new vision for a new Ireland”.

An audience member asked him if the North was a failed state was he therefore saying he was not interested in reinstating Stormont. Mr O’Dowd said that he wanted to get politics back working in Northern Ireland and that achieving a united Ireland was a “transitional” project.

Mr Donaldson said the DUP was prepared to go to Stormont on Monday and restore the Northern Executive and Assembly without preconditions.

UUP leader Mr Swann said that far from being a “failed state” Northern Ireland was “a wonderful place”. He said rather than a Border poll what was important was “to get the Northern Ireland Assembly up and running again”.

Mr O’Dowd gave a hint that this may take quite some time. He said what Sinn Féin canvassers were being told on the doorsteps was not to go back to Stormont until all outstanding issues were sorted out.